they are connected as the diagram is shown.

I have some servers and storages connected to the MS 425. and i will use it as a core switch.

in MS 410 I have L2 switches connected directly via fiber.

I would like to know which one is better to do.

1. Using 2 diffrent SVI, make users VLAN on MS410 +DHCP server for those subnet and route them to MS 425 via default route and Make the rest of VLAN on MS425? First diagram. 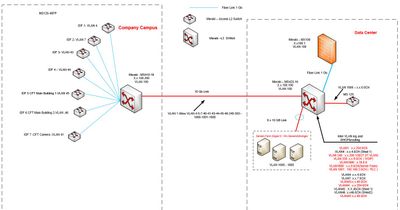 @Kave if you are going to allow all the VLANs over the 10GBe link then I'd go with your second option.  There is however a third option of having them split like your initial diagram and using a transit VLAN (or two) over the 10GBe link, if all the clients need the same restrictions, this could then allow for a more simple firewall rule set.  This can be important in Meraki switches as there is a fairly small finite number of rules that you can create.

Thank you for your responce.

i just would like to make VLAN pruning and i made Transit VLAN as x.x100.0/24 for all L3 switches and MX as well as you can see.

you talked about second transit VLAN, how it works i don't know about it?

Also need i make a static route on MX for ALL VLAN and make 1 static and default route for MS 425 to MX?