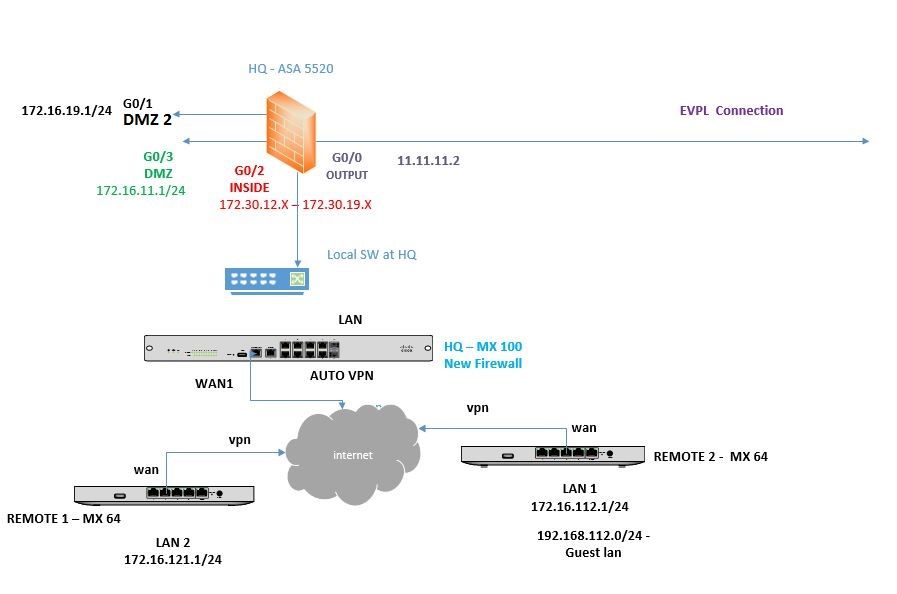 Does the ASA have routes to the remote VPN subnets via the MX100?

Yes, @MilesMeraki & I are trying to help answer that.

Where's the MX within this Topology? How/Where is it connected to the ASA?

Eliot F | Simplifying IT with Cloud Solutions
Found this helpful? Give me some Kudos! (click on the little up-arrow below)
0 Kudos
Reply
Subscribe
In response to MilesMeraki

Senan_Rogers
Getting noticed
If you check the diagram, you will see the MX . My Question is How to connect LAN in MX 100 to the INSIDE ASA 5520 So the two Remote VPN LAN in MX 64 talk with the INSIDE LAN in ASA 5520.? Keep in mind VPN ( auto VPN ) between Remote 1 and Remote 2 and MX 100 are okay and working.
0 Kudos
Reply
Subscribe
In response to Senan_Rogers

Hey @Senan_Rogers, If you're asking how to connect for best practice, I'd chuck it behind the ASA in a DMZ VLAN if the sole purpose of the MX just for Auto-VPN/VPN concentration. Have a read of this guide which will provide some more information on MX's in Concentration mode - https://documentation.meraki.com/MX-Z/Deployment_Guides/VPN_Concentrator_Deployment_Guide.

If not in VPN Concentration mode, will the MX be replacing the ASA?

Eliot F | Simplifying IT with Cloud Solutions
Found this helpful? Give me some Kudos! (click on the little up-arrow below)
0 Kudos
Reply
Subscribe
In response to MilesMeraki

I think what you are suggesting would work provided that the break out of the ASA is the same as the MX100 currently has.

@MilesMeraki I understand that he's asking how to connect it to a LAN port on the MX100 and configure correctly.

Senan_Rogers
Getting noticed
@ITzhak
You get it, this is exactly what I was asking.
0 Kudos
Reply
Subscribe
In response to Senan_Rogers

Is it possible to consolidate your EVPL and your (MX) WAN? Or do you need to keep the two breakouts?

Senan_Rogers
Getting noticed
@ITzhak
We need to keep the two breakouts.
0 Kudos
Reply
Subscribe
In response to Senan_Rogers

If the MX is to be acting as a NAT/Internet firewall with the ASA it'll need to be placed behind the ASA with some form of Layer 3 switch between the ASA/MX which will have routing enabled to route only specific routes over the EVPL connection and all other traffic to the MX for the Internet/Auto VPN.

You'll also have to configure the LAN VLANs on the MX for them to be advertised over the Auto-VPN connection and configure a static route for the LAN VLAN's on the MX to point to the layer 3 device.

Eliot F | Simplifying IT with Cloud Solutions
Found this helpful? Give me some Kudos! (click on the little up-arrow below)
1 Kudo
Reply
Subscribe