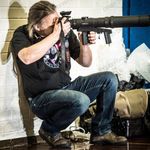 View All
Latest Contributions by Phill_Northwood

by Phill_Northwood in Community Announcements
Ahhh the days of BNC networking.... 10 meg half duplex and every few days you wandered the office trying to find the piece of furniture that has been dumped on the single cable breaking it and taking down the whole network!  such fun days... oh and then there were the days when the end cap terminator failed on the cable and you had to try and source one coz the boss had stolen your 2 spares for his home lan.  fun times! ... View more

by Phill_Northwood in Meraki Projects Gallery
So the lab has progressed, I now have my dc site running as 2 meraki networks (4 BGP AS's as site is split across 2 buildings to provide HA) with active active MX's in vpn concentrator mode integrated with my BGP routing table.... all in all Meraki has simplified the deployment and with the right amount of reading it seems to work very very well.   ... View more

Re: Here is my home lab/network

by Phill_Northwood in Meraki Projects Gallery
ahh the 6pack fridge was a prize years ago, integration testing is really me just me doing exam practice, I have ASA, PAN, Fortinet and MX at the moment, Pan is by far the best followed by fiirepower (not in my lab I only have an ASA) the MX is a good SD-Wan appliance and can at a pinch become a firewall for a small site or edge office in my assessment, I wouldnt use them as the firewall for a major site or DC, which they kinda say too with the vpn concentror only mode option on them.  ... View more

by Phill_Northwood in Meraki Projects Gallery
So this is the lab.... 3 of the 4 sites are built and connected to 1 mpls provider.... next step connect second "mpls" and convert one site to vpn-concentrator only mode   ... View more

by Phill_Northwood in Meraki Projects Gallery
9 Kudos
9 Kudos
Hey All,   I'm building a MX deployment with a slightly unusual bent.... I have 2 MPLS clouds (both sans internet connection) that I'm working around..... not planning at this stage to add internet tunnels or internet only spokes, basically doing a hardware upgrade from rubbish routers to some nice single plane of glass managed kit....   Will post a pic once I have the lab "built" mean while here is my home desk firewall lab   Cheers  Phill ... View more
Labels:

by Phill_Northwood in Community Announcements
1 Kudo
1 Kudo
Darn I only saw this competition 4 days out from it finishing 😞   ... View more

Re: Here is my home lab/network

by Phill_Northwood in Meraki Projects Gallery
this is mine.... (yep there is a palo alto 200 under the fridge and a Fortinet on top of the MX.... lets call it integration testing 🙂 ) ... View more

by Phill_Northwood in Developers & APIs
1 Kudo
1 Kudo
Ok, so in my case I want to migrate cisco 3750-g&x switch configs to the MS platform.... there is in fact an api script to do this 🙂 (happy dance!!)  its here....    https://github.com/meraki/automation-scripts/blob/master/migrate_cat3k/migrate_cat3k.py   cheers Phill. ... View more

by Phill_Northwood in Developers & APIs
Yeah I would normally rebuild from ground up but we have some large switch stacks based on 3750's that we are moving to Meraki and want to retain the description and vlan info... a script to import this info would be very useful... will have a look at the script you suggest in my dev enviroment and revert back. ... View more

Re: Ascom i62 VoWiFi phones

by Phill_Northwood in Wireless LAN
Hey Philip,    We did turn off all the 802.11ax it made no difference at all, honestly we spent alot of time working on getting the 45's to work and for us especially with the i62's.  We also saw heaps of failures on windows10 clients trying to connect to the MR45's but it was less of an issue than the i62.... for the record tho the clients that could access them loved them.   Happy weekend.   Phill ... View more

by Phill_Northwood in Wireless LAN
3 Kudos
3 Kudos
Hi All,   We have done a migration from an aging cisco wifi deployment to Meraki and have had no end of trouble with our Ascom i62 voice over Wifi phones.   Just in case someone else is considering this move I thought I would post what our experience has been and what we have learnt and the work arounds we found to make our phones work again....   We migrated to a mixed fleet of MR42 MR74 and MR45 access points, we initially tested on 25.9 as per the Meraki-Ascom interop document and after that when we deployed the ap's moved to 25.13   The issues we have seen are as follows:   1 RTP breakup and connection issues   2 Phones going to sleep and then ending up in a coma (never waking for a call)   3 Phones dropping off the phone system with "no channel available", we narrowed this down to being an issue on the MR45's.  Interestingly the client (phone) will connect to these access points ok but they randomly drop out (every 5-15 mins) and have to be manually reconnected.   Resolutions/workarounds to the above As per a suggestion found here and subsequently discussed with support we moved to 26.4 and this cleaned up the RTP issues We worked out that the sleep time on the i62 is about 9-10 seconds.... so I wrote a little python script to ping the whole fleet (/24 subnet) every 7 seconds. (the script doesn’t wait for ping replys so manages to smash out a /24 in about 2 seconds)  This has managed to keep the clients alive but the down side is reduced battery life... on cisco we got about 18-24 hours of active usage from a full charge on a handset, now we get 7-8 hours but if the staff doc them in the charger when they are at their desk then it gets them thru the day.  the script is below.... not I'm not a programmer and its more an assemblage of stuff I found online.... 3 we swapped out the MR45's and the problem with “the channel disappearing” instantly went away.... it was amazing... one minute phones are complaining about "no channel" with an audible alarm which was going off every few minutes (high density office) and the next minute they just stopped losing the network! what changed.... I swapped out the AP's.   I still stand by our decision to move to Meraki Wireless, others have questioned it but I believe we will resolve this eventually and with a work around in place we can live with the phones till then.  The benefits to the other wifi networks we are running has been well worth a bit of pain.   My absolute 100% recommendation on this is that you involve your channel partner and especially work with your Meraki rep.  The support team have been very supportive 😀 however it’s been through the additional efforts of our fantastic rep that we have made the most traction.   The magic python script follows…. Pls don’t laugh   😀   cheers  Phill   import time import subprocess import os   for i in range(999999):         print "run number ", i         with open(os.devnull, "wb") as limbo:                 for n in xrange(1, 253):                         ip="10.61.22.{0}".format(n)                         result=subprocess.Popen(["ping", "-c", "1", "-n", "-W", "2", ip],                                 stdout=limbo, stderr=limbo)           time.sleep(7)     ... View more

by Phill_Northwood in Mobile Device Management
Hey Commnity...   Just wondering if anyone out there is running Meraki MDM to deploy settings to androids (specifically honeywell barcode scanners) and if so do you deploy Anyconnect VPN settings at all with it ?   Cheers Phill ... View more

Re: The Points Contest is BACK!

by Phill_Northwood in Community Announcements
4 Kudos
4 Kudos
Cool! can the MV stream to a NVR as well as write to its intenal flash ? ... View more

by Phill_Northwood in Community Announcements
3 Kudos
3 Kudos
I have a new avatar!   (its me photographing rollerderby with my 800mm novoflex follo focus lens 🙂 ) ... View more

Re: This contest is ON POINT.

Re: vMX for VmWare

by Phill_Northwood in Security / SD-WAN
Ok so it appears I'm left looking at a vMX in azure with s-2-s vpns to my existing DC firewalls... not awesome but probably workable. ... View more

by Phill_Northwood in Security / SD-WAN
Hey Meraki Community....   Just wondering if anyone knows if there is a vMX for VMware ?  I have a large dc full of VMware hosts and it would be nice to be able to deploy a vMX there without adding new electronics to the environment (power requirements).... ?   Cheers Phill. ... View more
Kudos from
View All
Kudos given to
View All
My Top Kudoed Posts
View All