In our network we are using MS225 as a stack for 4 switches and MS-425 Stack as core. We have a call center for around 20 peoples running SIP phones hardware. Problem is those sip phones randomly start unregistering, lets say 2 phones at noon 12:00 and 3 at 05:00PM. I thought it was happening because of my DHCP server lease which is currently set as 4 days, but I'm not quite sure if it has anything to do with my DHCP.

I tried rebooting all those phones, turned off RSTP, Disable BPDUGUARD still the same. I never had this issue before in my network when I had Cisco 3750 switches. As soon as I deployed Meraki MS series switches I started facing this issue. I'm on MS 9.32 version.

Is there anyone else who is facing the same issue I'm facing?

Haven't had issues with SIP PoE devices on 225's on any firmware level.

Checked the power figures and you within budget?

As an after thought... I did have 1 phone yesterday unregister.  The port status on the dashboard was PoE active but no link.  Did a cable test and came back with all 4 pairs with dashes which was a little odd...  Did a port cycle to no affect, ended up physically pulling the cable and replugging.  Assumed it was a bad cable...

Nope, never had an issue with any SIP phone rebooting on a Meraki switch.

Why don't you enable logging on your SIP phone and see what reason it is giving for rebooting.

Found this helpful? Give me some Kudos! (click on the little up-arrow below)
0 Kudos
Reply
Highlighted

It's not rebooting just unregistering for some reason which I haven't figured out yet. I rebooted all the phones thought that might be the issue still waiting for the agents to come up hey no service.
0 Kudos
Reply
Highlighted

We have Avaya and Polycom.
0 Kudos
Reply
Highlighted

Cable test is fine showing two pair since it's a 100Mbps connection, did power cycle change the port on patch panel and switch.
0 Kudos
Reply
Highlighted

We have 10 phones on PoE and the rest of them are direct power same issue with all, it just happen randomly
0 Kudos
Reply
Highlighted

We connect the IP-phones to the switch, and the PC´s on the phones. The config is looking like that: 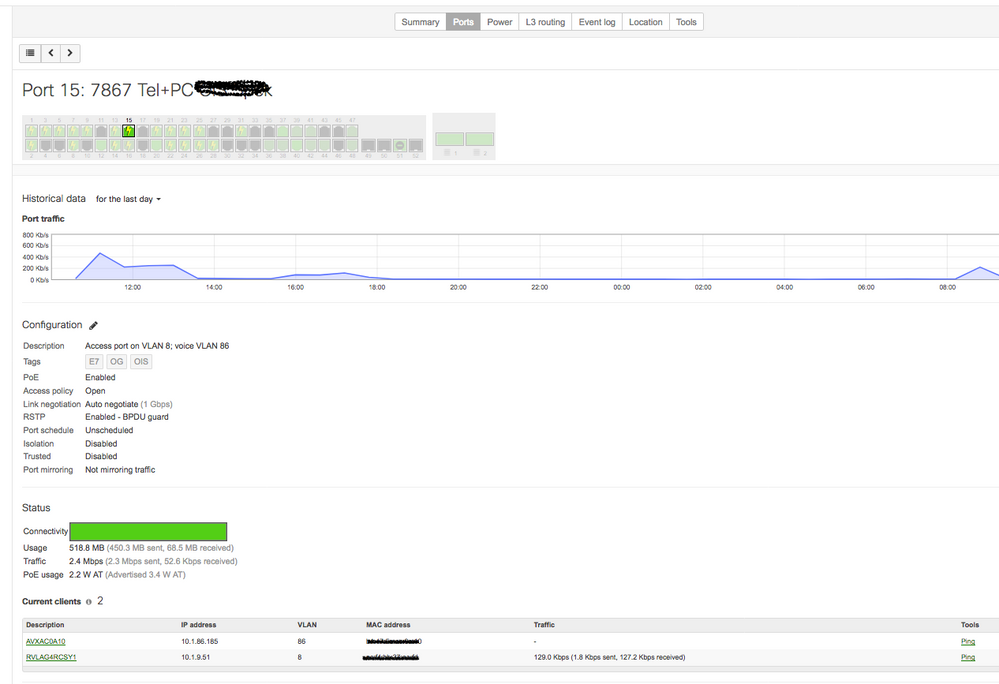 The phones are restarting when they loose the connection to the SIP-Server.

Can you check the Server Network connection?

I would definitely recommend opening a case with Meraki Support. Are there any logs at all on the phones or the Communications Manager that could be referenced? Do the phones seem to lose POE or simply just unregister? If it's the latter then the ideal way to troubleshoot this would be to perform packet captures near the switch where the CM is plugged into.

We ran into this exact issue. Are they by chance Avaya J129's? After going round and round with the vendor, we learned Avaya J129's do this. If you contact Avaya, they will tell you it is expected behavior. We had to replace them with the next model up to prevent deregistrations.

Was this ever resolved.

They have to communicate with a VOIP router on another floor and the traffic passes through a set of core MS 425 switches.

Phones on the same floor as the VOIP router all work fine. Phones on other floors that have to go through the core fail with a 'line unregistered' error.