I simply cant remember if I asked (and it is now turning into kind of an obsession for me 🙂 ).

Have anyone seen their MR46E set in ETSI reg. domain go above 12dbm in transmit power on 2,4 Ghz ?

Even with normal 3dbi antennas ? (MA-ANT-B6)

It (the MR46E) should be able to go to 17dbm with the 3 dbi antenna attached (that should give you a 20dbm EIRP that is the ETSI regulatory max), but it just stops at 12dbm 😕 (With the 3dbi gain in the antenna that is 15dbm EIRP - so we are basically missing 5dbm).

Created a case about it, but I never got a real answer. Just posts to documentation that did not make much sense, and talk about "remembering to add 3dbi because of beamforming" --- ehh ok .. that still leaves me with 2dbm that the radio should increase the transmit power with in the ETSI regulatory domain ?

To compare, I took a good old well tried out Cisco 2702E-E and attached the standard Cisco "rubber duck" to it.

Turned that up to the max allowed with that antenna, and walked around with my Ekahau Sidekick (passive scanning) to compare. (I also compared with some other Cisco APs that I had around, 2702i and 2802i and so on .. the result is almost the same). +/- 1db) - All APs where placed the same spot on the ceiling, at around 2.5 meters.

Here is a picture of the result on "the edge".

To no surprise Im missing around those 5dbm of signal strength.

Now my question. Why ? Why does the MR46E not turn up transmit power to more then 12dbm in ETSI ? (what crucial piece of information am I missing here ?)

Am I the only one who has a problem with this ? 🙂

Other Meraki AP does not seem to have this problem (when I take a quick overview of other Meraki APs that I have access to).

But the MR46E just does not go higher then 12dbm with the 3dbi antenna. 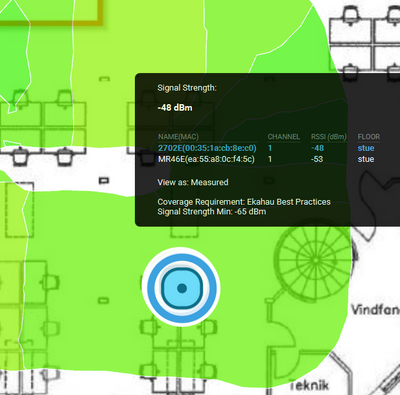 Just a snap of the data a little closer to the two APs.

Just a quick update and some explanation from Meraki on what might be going on here.

So, according to people I have been talking to there is an explanation (I dont like it, but here we go).

- This is how the APs are certified today.

This makes somewhat sense, since the combined power output power of the signal cannot be higher then the 20dbm EIRP max in ETSI (Still only talking 2,4 Ghz here to keep it simple).

But why then do we still see such a weak signal when just doing passive survey, where beacons are single stream, and should then be send at the highest (or higher) transmit power (if configured).

- The explanation from Meraki is that, due to the fact that you cannot be sure that beamforming is working, and your client when roaming, normally listens for beacons, could "think" that the signal to a new AP would be ok (because of the max transmit power of beacons), but in reality the signal might not be (if beamforming is not working correctly).

And because of this, the entire AP turns down transmit power for everything.

- Now this opens up a whole new bag of worms, in my opinion.

What about those legacy a/b/g/n clients that do not support beamforming, and are only 1 SS.

In this case they will lose 6db of cell size. 😕 auch.

And furthermore if you do the EIRP calculation in this case there is still a problem (at least i think so).

So if what they say is the way they want it to work, the AP should turn down its radio to 11dbm in order to be compliant).

- Sorry if the above explanation is a bit messy 🙂 - But this is how I experience what they are telling me. 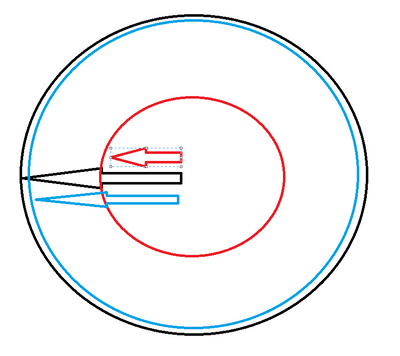 So this is a very rough drawing of how I understand whats going on. Black is the 1SS cell edge with ETSI max transmit power (that the AP does not do) - Blue is the potential celledge if / when beamforming is working (black and blue should be the same size here of course - but for illustrative purposes they are not 🙂 ) - Red is the actual signal strength cell edge , or if beamforming is not working.

And in case people do not realise how "much" 6db is in actual distance, it of course depends, but this illustration from semfionetworks illustrates it just fine (aka. half). 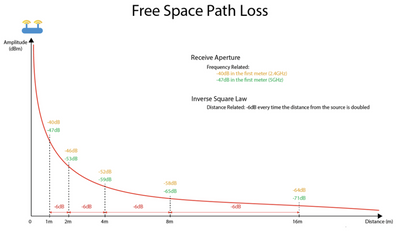 I'm trying to wrap my head around this how we should consider this in a design:

Let's say I design a VoWLAN network with every AP (MR46) at 14 dBm EIRP (@ 5Ghz). This means I set the AP in the dashboard at 8dBm (as far as I know that's always the AP output power without the antenna) and with the antenna gain I end up at 14dBm EIRP.

Does the beam forming gain only add up when I allow more output power than 14 dBm?This could result in sticky clients.

When beam forming kicks in does the output power of the AP go back to 2 dBm to compensate the 6 dBm gain to keep the max at 14 dBm?

I'd like to hear Meraki explaining this because if the behavior is unclear you can end up with pretty wonky designs.

The real problem is that not all clients supports beamforming.

(I mean, in Classic Cisco APs there where, as far as I remember, some proprietary beamforming tech that would give older clients without beamforming support a better signal, but I dont thinks that is around anymore - ClientLink was its name, now I remember - Introduced in 1142 APs , thats what my brain is telling me).

Standard based beamforming been around since 802.11n, but not all "n" clients supported it.

I think it is required to be supported on .ac and beyond.

But the client has to send "sounding" frames to the AP in order for it to work.

Now, if your client supports this, and the AP CAN actually use all 4 antennas for the beamforming, well then, in theory, you would get the added benefit of a 6db better signal.

For all clients that do not support this however, they will have to live with a much smaller cell size.

And that is my main issue with this.

There are so many unanswered questions here.

But Im pretty sure that the AP will not "go back", as you call it, (at least not the way it is now) in transmit power, because they already include that (perhaps possible) beamforming in their max EIRP setting at this time, no matter client support. But yeah. Its bad.

For mr46 max is also 12 now . Looks like something has changed because it could go higher before.

I just configured the RF-profile of my MR44 to min20, max30 and guess what ... 12dBm based on the dashboard output. Can't measure it as I am not onsite.

I have a customer with MR46E with MA-ANT-3F antennas and it's impossible to get the output power above 6dBm on UNII-1 and UNII-2e (max EIRP 17dBm instead of the expected max 23 dBm). It allows 12 dBm on UNII-2e channels.

Support could not give me an answer (like above) why the settings are lower than the MR42E (MR42Es do not have these limitations or uses the 3dBm margin, they are 3x3:3).

All in all the dashboard is a bit confusing when it comes to output power and EIRP values.

I have also started to do some testing on 5Ghz.

Thats 6 dbm lower then max. and that is ABSOLUTELY terrible ( for non-beamforming clients, bascially all pre. 802.11ax clients). Why is this AP only sending beacons ( that are 1SS transmissions) at the same lower power, regardless of beamforming. - And apparently also all other dataframes that are non-beamformed to these 1SS or pre-ax clients.  Should I start telling my customers not to deploy Meraki wireless in warehouses where pre. 802.11ax 1 SS clients are dominant ? (I mean 6db is half the distance, and on the cell edge, that is a lot of distance).

Yeah I fell into this trap as well.  As I had a design with MA-ANT-3-F antennas even on the 5 GHz I had to use channels 100 and above to get to my normal transmit levels.  I did my survey with the assumption I could just use the antenna gain.

I don't understand why they did it per element for the indoor AP's while you can get huge distances with MA-ANT-27 on outdoor antennas without that per element definition.

I'm not even sure you are actually getting the extra 6 dB in combined antenna power to double your coverage distance.  I hope Meraki would come with a solution for this because you can have designs where you are only allowed to transmit 2 dBm on the 2.4 GHz band and 6 dBm on the UNII-1 band with that antenna... ridiculous actually!

In theory, beamforming to a client should give you a better signal at the client end. But that requires client "feedback", and in theory that was specified in the 802.11n specifications, but actually never implemented on clients (Intel, I think, might have done it, as the only client vendor at the time) , unless the Meraki APs can do what Cisco used to call "ClientLink(tm)", and I do not think they can.

Regardless, sending single stream data and beacons at the lower transmit power is bad, especially for warehouse environments. And Meraki should fix this, sooner rather then later.

If you have enabled Auto-rf this was a common issue with old firmware versions.

Increase the minimum transmit power to 17dBm and apply manually to all the APs.

You can keep the max tx power max or 20 dBm (AP supported max power on radios).

I have tried setting the power manually but even then the dashboard keeps telling me the max output power is lower than expected. I haven't done any measurement tests to see if the measured output power increases when setting it manually higher. If so the dashboard is not reporting it right but considering the explanation that this is "working as designed" I doubt there will be any difference between the dashboard and the actual output power of the AP.