In the topology screen, the MS390's don't always show their uplink port correctly.

Below is a screen shot of my topology.

Both show their uplink port going to an unknown device.

For both, port 1 should be going to the switch to the left, but it says no LLDP info.

And on the upper 390, no link is shown going to the stack to the right.

But the lower one does show it.

I've got a third 390 (not shown), where the topology is working correctly.

Anyone else seen this or know of a fix?

I think that is pretty good for Meraki topology, look at this complete Meraki site where the diamond on the left is the MX pair at the bottom right...  I despair! 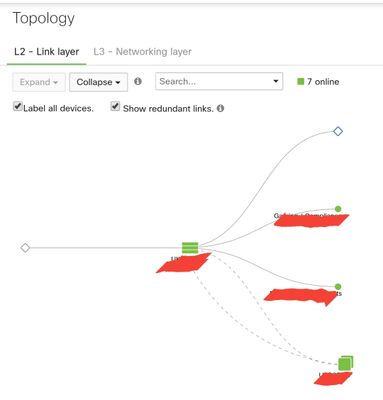 Just realised that if I had unticked the label all devices box, I wouldn't have had to scratch them out! 🤔

At least I'm not alone 😀

The topology usually figures itself out - sort of.

So far, not overly impressed with the 390's.