How to create a 2GHZ only SSID

How to create a 2GHZ only SSID

Is it possible to create an SSID that only broadcasts the 2GHz channel on the MR33 Access Point?  I have some devices: Apple Watches, Thermostats that only work on the 2GHZ channel.  I haven't been able to find anything stating it can or can't be done.

After they enable it, you will see the following:

NolanHerring
Kind of a big deal
You have to contact support, and have them enable that option/feature as it is hidden.
Nolan Herring | nolanwifi.com

After they enable it, you will see the following:

I'll get a case open and have them get it enabled.

I didn't expect to have my question answered in less than 2 minutes.

Glad I could help !

Nick
Head in the Cloud
On a side note - is it possible to force a client on to 2.4Ghz if you have the SSID using Dual Band does anyone know?
0 Kudos
Reply
Subscribe
In response to Nick

NolanHerring
Kind of a big deal
Depends on the client. If it is a laptop for example, the advanced property settings on the wireless settings you can toggle it there to be 2.4GHz only. Otherwise not really, it's always up to the client. If the 2.4GHz is noticeable stronger than 5GHz, and you do not have band-steering enabled, I would reckon they might lean more towards 2.4GHz. However that would affect all clients and that is probably an outcome you don't want.
Nolan Herring | nolanwifi.com

That brings up a good question regarding the Band-steering.  In your experience, is it more beneficial to have it enabled?

What is the potential cons of having it enabled?

NolanHerring
Kind of a big deal
To quote a friend, it depends.  😃
Some are 100% against it and prefer to use proper design to 'persuade' clients to connect to 5GHz. By that I mean by using a 6dB difference in power between 2.4 and 5Ghz, which tends to be the magic spot so that cell sizes match and the end-user doesn't hear the 2.4GHz much louder.  Client devices have a tendency to be stupid, and the louder the RSSI is, they cling to it.
The theoretical 'pros' are that it will get more clients onto 5GHz and that is usually what you want since 5GHz usually is much cleaner, less noise, faster throughput etc.
The 'con' however is that it is an imperfect solution to an imperfect world. Clients send out Probe Requests on 2.4 and 5GHz at the same time. The method it uses to accomplish this is by ignoring the probe requests the client sends on 2.4GHz (usually around 3 times) and by doing this, it hopes that the client will see the Probe Responses on the 5GHz side and end up connecting to that.
https://documentation.meraki.com/MR/Radio_Settings/Band_Steering_Overview 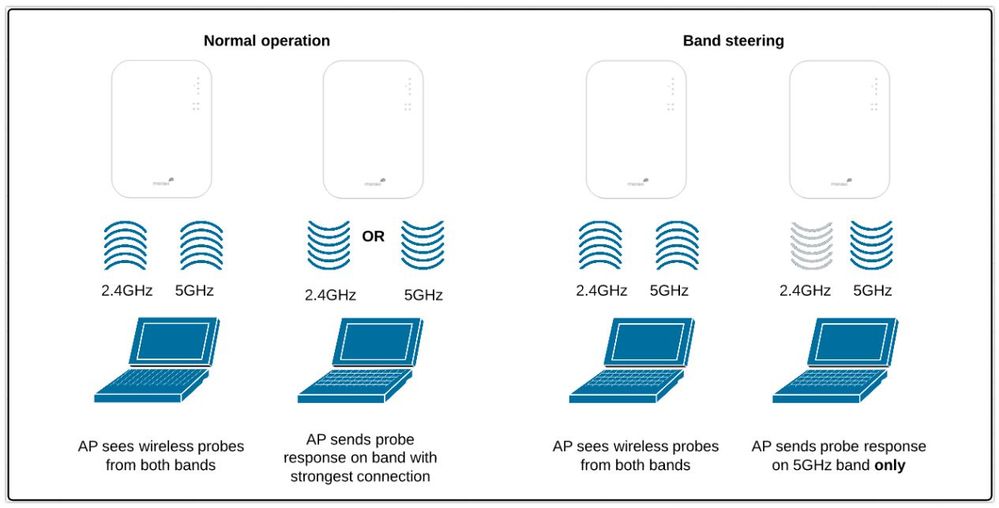 Doesn't always work, and so sometimes it might cause some 'thrashing' and and the end of the day you want your wireless to be as seamless and as stable as possible.
My solution, in case you noticed by my screenshot above, is to use dedicated SSID's per-band.  My corporate networks are 5GHz only. The guest network we have, is dual-band with the band-steering enabled and for the most part it works, have not noticed any 'obvious' issues.
I would prefer to use seperate SSID's for guest, the problem though is that it just doesn't look 'clean' and now your relying on end-users to make the right choice.
Random Example:
Starbucks  <---- one SSID, clean, simple, with band-steering
vs
Starbucks  <---- 5GHz only
Starbucks Legacy  <---- 2.4GHz only  (Legacy being the word I"m using to reflect 'slower' or 'less optimized'.)
It achieves the goal, but you might run into users choosing Starbucks Legacy even though they have a 5GHz capable device.
So for non-critical SSID's like guest, I will use it. For business SSID's though, I will use a 5GHz only SSID and it takes all concern out the window.
Nolan Herring | nolanwifi.com

@NolanHerring Just wanted to say thanks! Got in touch with the Support for activating the 2.4 GHz Band only , since then I am able to play games on my phone normally 😄 😉

Believe for all devices. Just open a case and let us know 🙂

Microfiche
Here to help
FYI - they can do this for the MR18 as well - just did it to hopefully solve a Nest Cam issue...
1 Kudo
Reply
Subscribe
In response to Microfiche

This feature is limited to specific AP's ?  Really?

NolanHerring
Kind of a big deal
Not limited to AP model that I am aware of. The change happens on the dashboard side under Access Control settings.
Nolan Herring | nolanwifi.com

Opened ticket via dashboard they enabled about hour later.  Currently testing with Legacy devices.. What brought me down this path was support for Wyze Cameras, I was having lots of channel utilization at 90% needed a way to be sure nothing is on the 2.4 except 2.4 devices.

Thanks to  you guys for this Post which I learned this feature existed.

Nick
Head in the Cloud
Thanks - we have a couple of clients who use Nest Camera's and suffer drop outs. Nest say to switch to 2.4 Ghz to solve the issue. It does solve the problem but we've never been able to to do it on the same SSID and have had to resort to creating another SSID
0 Kudos
Reply
Subscribe
In response to Nick

Yes, you can disable the 5 GHz radio by setting the power to Off on the Radio Settings page. This will force it to 2.4 GHz, and now you can increase the power on 5 GHz to something lower than 2.4 GHz by at least 6-9 dB lower than 2.4 GHz and the client should stay put, at least for a while.

I would recommend asking support for the 2.4 GHz only option.

Colin Lowenberg
wireless engineer and startup founder, formerly known as "the API guy", now I run a Furapi, the therapy dog service, and Lowenberg Labs, an IT consulting company.
0 Kudos
Reply
Subscribe
In response to colinster

NolanHerring
Kind of a big deal
There is no option to set the 5GHz radio to 'OFF', only the 2.4GHz radio has that ability.
Nolan Herring | nolanwifi.com

colinster
Getting noticed
Wow, I learn something new every day.
Colin Lowenberg
wireless engineer and startup founder, formerly known as "the API guy", now I run a Furapi, the therapy dog service, and Lowenberg Labs, an IT consulting company.
1 Kudo
Reply
Subscribe