Every day the event log shows pages of entries  showing the switch port a workstation is attached to alternating disabled/enabled. What is going on? It feels like it is DHCP renewal related, but is not repeated 12 hours later (24 hour lease)

Probably not else to do, you've proven the issue sticks with that physical port.  Wondering if it's worth trying to connect a different device to that same port, watch for issues, watch the event log.  Short of that I'd open a ticket and see if Support is able to get any deeper visibility.  Possibly not, and they might want to RMA the switch if they can confirm port 1 is misbehaving, especially if it's showing issues with different types of devices connected.  If nothing else, they'll want to grab some pcaps while you connect something to that port.

Is there a docking station connected?

Did you already try another cable or try updating the network driver of the workstation?

Any errors on the port? what is the result of a cable test?

No docking station, cable is Cat6A and OK. It is always at roughly the same time, early in the morning. Nothing else affected, but it is the first port on the switch.

These events will occur when STP convergence occurs, but that would normally be across all active ports. With individual ports showing these changes and client devices are connected to it it can mean that the port went down/up for a moment or that the client device stopped sending packets for some time, then traffic was once again seen sent by the client. Are you having issues with specific ports and users complaining of connectivity loss or is this primarily event log related?

These events will occur when STP convergence occurs, but that would normally be across all active ports.  . . .

Are you having issues with specific ports and users complaining of connectivity loss or is this primarily event log related?

This happens on one specific port and I look at the Win 10 device that is connected to it and it shows that it has lost connectivity to the internet, usually in the middle of of doing something web related.

It normally only happens early in the morning, so it is time related ???? (The only other obvious event around that time is DHCP renewal). As a first step, I have switched the device from Switch Port 1 to Port 2, and I'll see what happens tomorrow morning. If it recurs, I'll swap the cable.

Sounds like a plan @Uberseehandel let's see if we can get this problem to follow the PC to another port (and if it then continues to occur around the same time of day).  And in the process, let's get some other device connected to that first port, and see if the problem sticks on that same port, but with a different end device.  Also, not to introduce too many variables at once, but maybe just for the heck of it, adjust the DHCP lease time to a week instead of a day and watch for identical versus different behavior.

I'll do it day by day, changing one variable at a time. I'll try shortening the IP lease time to check if that induces the situation too.

I am also trying to work out why I can't get Chromecast to work when the wired device is on a different VLAN with Bonjour enabled and the two VLANs allowed access to each other (both specific ports and all ports have been configured).

I had this exact same problem 2-3 months ago, support suggested I try a different port on the switch and see if the problem followed the device... It didn't and when I plugged another device into the suspect port I never had any issues....

Without knowing exactly what caused it the case was closed.

Yesterday I configured switch port 2 the same way as switch port 1 is configured and moved the Ethernet cable from port 1 to port 2, without disabling the now vacant port 1.

I had to be out early this morning so I wasn't able to observe what occurred when the IP lease would have been renewed.

When I turned the workstation on, it booted normally (including getting a fresh IP address), and after 2 hours of emails and using the browser, connectivity has not been lost.

However, when I check the event log for the switch I see - 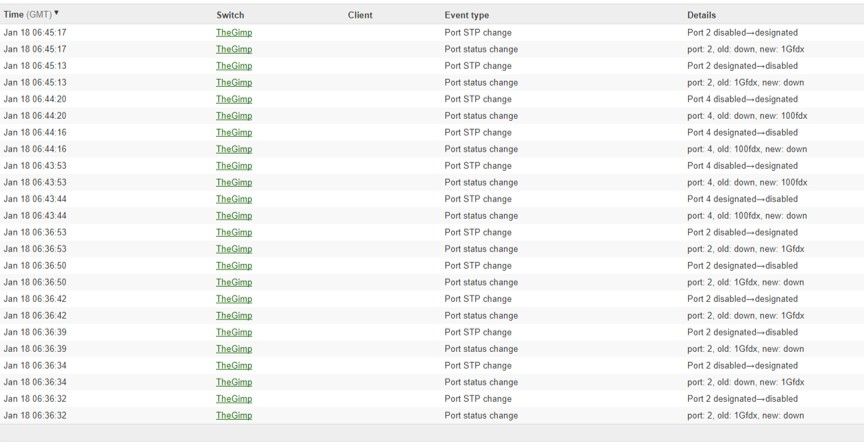 The now vacant Port 1 is no longer flipping, but port 2 has started (there are pages of these entries). Also note port 4 is up and down like a (simile unsafe for work). The device attached to port 4 has been active all night, playing a radio station and the port went up and down frequently.

So something is not as expected. 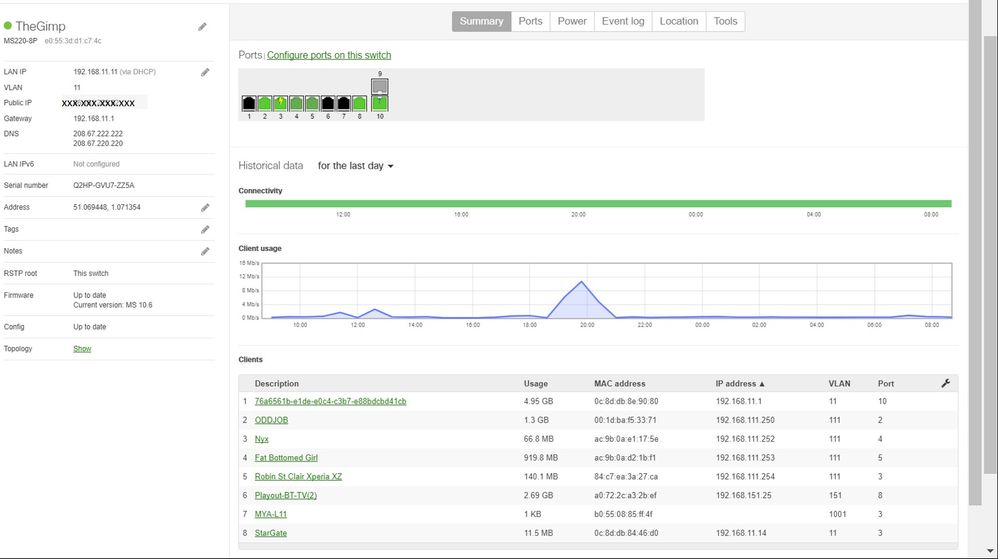 It would be good to get to the bottom of this ;-[]

As you will see from my post to @MerakiDave it seems that my situation is a little different to yours (and not in a good way).

Thanks for your input

- I had this kind of problems with Dell PC´s. After firmware updateing the network card it was gone.

- Some other devices like Apple iMacs had this problem, and I solved it with fixing speed to 1GBit on the switch, since then there wasn´t this problem appearing

- some other devices had a power-saving problem, and then the link speed changed all the time. After switching off power saving the problem was gone.

I may have a related problem, to that which you describe.

However, the device on port 4, is an FE as opposed to a GE device and the port speed is set to auto, I'll try explicitly setting the port to FE. This would seem to be an issue for Meraki. I have another device from the same manufacturer that is also FE as opposed to GE, yet its port behaves itself, at least when it is not sleeping.

As far as the workstation is concerned, as it is running Win 10 Pro (64bit), I have no idea what is happening as far as driver updates does, the OS is never the same from day to day, and I don't have a team of guys to keep on top of this ordure now I am on permanent holiday. Unfortunately, I've had to send my two modern workstations to the design office and the Ethernet drivers in the nice but old lappie may be contributing, and as It doesn't have USB3, the options are not good as far as bypassing the

I don't like the idea of turning off power saving, this is all aet up in my home office. However, I have successfully tested Wake On LAN, so superficially the hardware is compatible.

Thanks for your interest.

The device on Port 4 was sleeping all night. The Port 5 device was playing all night with no issues.

Some progress being made -

Moving the workstation from switch port 1 to port 2 stops the workstation losing connectivity. Port 2 was configured to be exactly the same as port 1. So that is a problem solved - port 1 is "misbehaving".

What is the best way of handling this?

Maybe the cable had an loose connection. If you pull it back to the first port and checking if it´s good connected you will find out if this was the problem.

Turning off the power saving for the network card will not save a lot of energy, I think you won´t find a difference in the energy bill.

The workstation is turned off when not in use, so no need for power saving.

What I do need to do is plug another device into the original faulty port and see if the behaviour recurs. I'm a bit short on workstations at the moment having temporarily relocated a couple (this is a test location at home).

Got it, sounds like progress, and the issue stuck with that physical port.  Will need to try that same and/or other devices on what might be a faulty switch port and see if you can reproduce the problem at will.  Then I'd open a case with Meraki Support in case they might have some back-end tools or visibility to investigate further.  Certainly doesn't sound like anything configuration related, worst case they may need to RMA the switch if it actually has a faulty port.

Lat night I moved the workstation/laptop back to its original switch port, and the problem recurred - 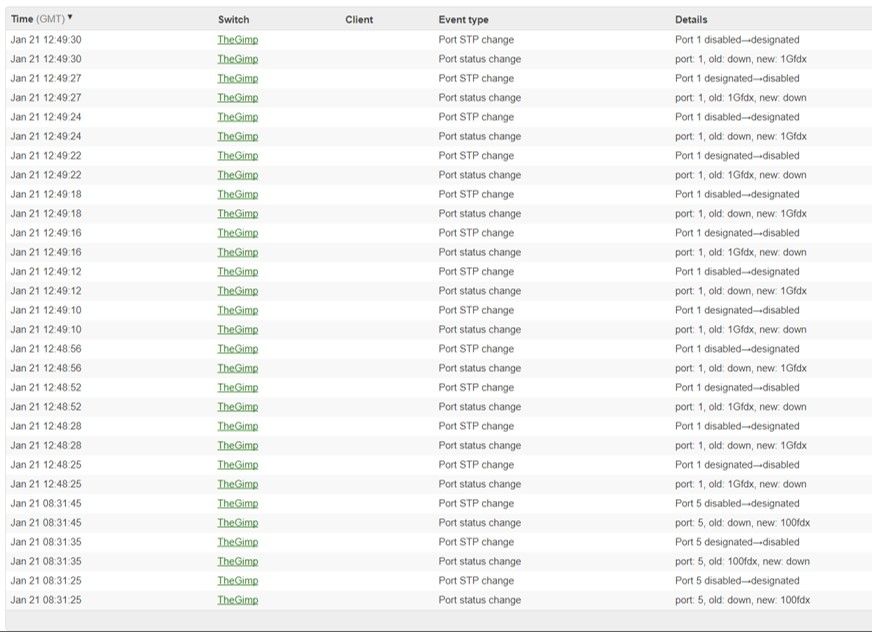 So I can cause this to occur at will simply by connecting the workstation to switch port 1 . . . on a MS220-8P. Are there any other tests I should do? Later today/tomorrow I shall reduce the IP lease duration to confirm my suspicion that the combination of of the port continuously flipping and IP address lease renewal causes the Ethernet connect to be lost.

Probably not else to do, you've proven the issue sticks with that physical port.  Wondering if it's worth trying to connect a different device to that same port, watch for issues, watch the event log.  Short of that I'd open a ticket and see if Support is able to get any deeper visibility.  Possibly not, and they might want to RMA the switch if they can confirm port 1 is misbehaving, especially if it's showing issues with different types of devices connected.  If nothing else, they'll want to grab some pcaps while you connect something to that port.

Tomorrow morning I'll try and check what happens when the IP lease is renewed, and then if I see the loss of connectivity from the workstation, I'll bring the lease period down to 4 hours and see if it recurrs every 120 minutes, for confirmation that there is an interaction. So I'll file a support case and take it from there. Thanks for your assistance.

Forcing link speed worked for me. All of my devices are rated for 1Gbps full duplex, that's what I set it to. Seems to be issues with auto detect.

I had the same issue with Apple computers. Dell/Windows is no problem but Apples are changing often their network speed. With fixed speed setting on the switch it´s working.