In the last week or two I've had multiple buildings lose internet access which in turn knocks out their internal network as well. CIsco Phones which should switch over to SRST backups fail, computers cannot print to network printers, and our internal IIS server is unreachable by IP. For whatever reason when the WLAN drops everything else goes with it. We operate remotely so getting a PCAP from normal users is neigh impossible.

NolanHerring
Kind of a big deal
Do you have full Meraki stack?

Local connectivity at the site should still function. If anything is relying out going out the WAN connection (for example DNS at your data center or something), then that will fail.
Nolan Herring | nolanwifi.com

DNS is offsite, but this has never been an issue in the past. DHCP is also offsite, but again that would only be an issue with a device connecting for the first time. The network stack is full Meraki with the exception of a Cisco 2811 ISR which we use as a H.323 gateway for external lines. We have run this setup for some time now, and in the past we've had no issues. In the last 4 weeks or so we've started getting reports of everything going belly up. I had the location in the topology below unplug their Cable Modem and see if anything worked. Nothing worked, and I had 2 other locations have the same issue.

Two had MX67C and One an MX84, one MX67C and the MX84 are running firmware 14.40 and the other MX67C 14.50. One has a SIM chip installed but doesn't seem to have failed over. Packet loss was high, but doesn't look like it was enough to force the change looking at the history, nor did I receive a notification of the fail over. Switches are MS 220's 24 or 48 ports, and AP's are all MR33's

Don't know if this is beneficial, but it popped up in locations that have had no changed in hardware or design recently. It's possible it's a firmware bug, but seems like one that would get a lot of attention really fast as well. Uncertain what the issue could ultimately be. 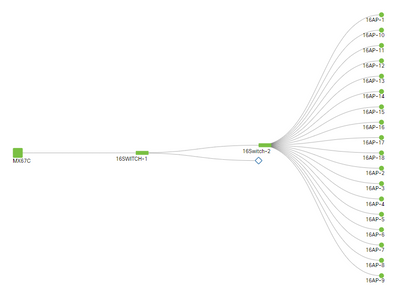 Does the MX uplink graph show a loss of connectivity?

Also with off-site DHCP and DNS I would run constant ping plotter to them and see if the DC is the fault.

from a telephony design perspective your dhcp should be local!  When your WAN fails so will your phones.  If you have an SRST router onsite move your dhcp scope for voice onto that.  Has SRST been tested historically and proven to work?

DHCP for the data network is handled off site, but the machine we need to access has a static ip and until the dhcp lease expires the license remains valid even after they expire if dhcp cannot be reached, but everything goes down immediately when the WAN does.

DHCP for voice is handled on the MX

Both send DNS back to home office

Until about maybe 3 weeks ago we had no issues and then when the WAN dropped the inside network crashed as well. The only change was moving the DHCP server for the data subnet back to home office instead of using the MX. The network equipment is staticed, the H.323 is staticed, and the target IIS machine is staticed so I don't know what would cause this.

From what I gather it's the IP network going down, since you can't ping anything?

It smells as if there is something routing the traffic to your WAN link, and then back into the LAN.

On the data network, what default gateway do you normally get, and where is the address supposed to recide?

Like what you see? - Give a Kudo ## Did it answer your question? - Mark it as a Solution 🙂
0 Kudos
Reply
Subscribe
In response to rbnielsen

I just double checked and the gateway is set to the MX on the Data VLAN. The Voice is handled on the MX itself.