I have a problem with a setup where I use two WAN ports on an MX64 and I need communication between the WAN ports.

Design:
My first attempt was to set up NON Meraki VPNs via the MX64 and to connect the MX to an MX250 via a LAN port. Which has the advantage that the remote networks are available in the AutoVPN. There is also a transfer network between the MX64 and the MX250. The construct also works as expected.

The only problem is that no firewall rules apply because both MX see each other as clients.

I then had a brief contact with Meraki Support. There I was told that I would have to rethink the design if I wanted to do firewalling between the two MXs.

For the implementation, I should realize the connection between MX64 and MX250 via WAN2.

Does anyone have any idea how to get the setup suggested by Meraki Support to work? 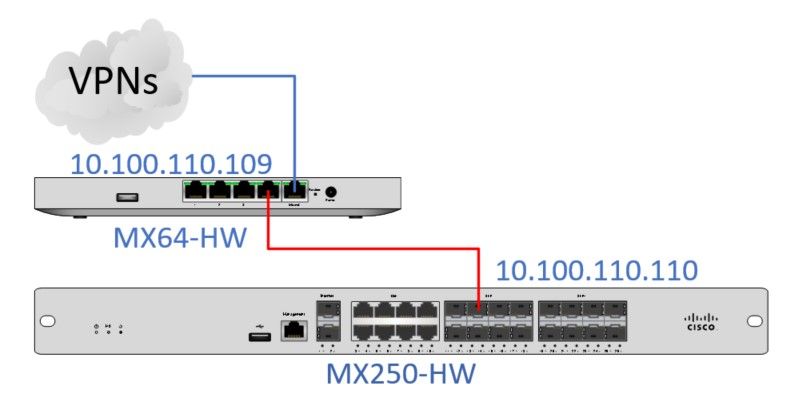 What fw rules are not working when connecting  on the lan ports?

The normal L3 firewall works between vlans so this should work. And another option would be a group policy on the transit vlan.

This setup works. But as described, only without a firewall.

I have created the following L3 rules.

I can still reach the server without any problems. Or ping the client from the server.

Even if I put a deny for both subnets, it still works.

And here the Meraki support told me that it is because the two MX see themselves as clients and I cannot regulate the traffic via the firewall.

That would probably only work if the local LAN was connected to the MX64. But this is not the case, as the MX64 only serves as a non-Meraki VPN gateway.

Hence the idea from support to do this via a no-NAT on WAN2 of the MX64.

This brings me to my problem that I can only reach the WAN2 interface from the local network and the traffic does not go through the non-Meraki VPN.