I couldn't find a topic that addressed this exactly, so I'm starting a new one. It's pretty simple: What types of 4G LTE modems/routers are you using?

We're wanting to move away from the USB cellular connections, but will never have budget for CradlePoints. This device would simply be there in case the main broadband connection failed. We don't need anything fancy, but I'm also trying to keep security in mind and not really looking to feed the next IoT bot. ConnectedIO has been recommended before, but with the rise of SD-WAN there HAS to be other vendors out there with solutions too.

Specifically, I'm looking for vendors that have compatible devices for US - Verizon service.

Any advice is appreciated!

Any recommendations for the Meraki MX series supported USB modem other than Huawei for Global region?

You can find the list of all the supported modems on this page:

They are divided by country so it should be fairly straight forward to find one that suits your needs.

Please keep in mind that what I post here is my personal knowledge and opinion. Don't take anything I say for the Holy Grail, but try and see!
Appreciate who helps and be respectful of every opinion and every solution offered.
Share the love, especially the Meraki one!
2 Kudos
Reply
Subscribe
In response to GiacomoS

@GiacomoS I appreciate the link, but we're moving away from USB modems. They are simply too unreliable. We have numerous cases in the wild where the state of the Cellular modem shows 'Ready', when in fact they've obtained an internal IP address (usually 192.168.1.2) and are not connected to the carrier network at all. There are other cases where the connection will be working one day, and then we find it sitting in the 'Connecting...' state the next.

We've been told that engineering will not be incorporating these interfaces into the SD-WAN offering, which is a huge disappointment. We've also been told that there will possibly be an MX model with cellular built in, however this is not helpful when our MX devices tend to be located inside buildings that block cellular signal.

Got it! So you are effectively looking for a decent 4G modem that you can then RJ45 back to the MX, correct?

I hate to say this, but if you are looking for a cheap offering whose job is just going to forward traffic to 4G provider, you could look at the likes of TP-Link / Netgear and D-Link, keeping in mind that they are not enterprise grade. Draytek might be a solid middle ground, but you'd need to find a way to have it working as a modem and bypass all the traffic inspection that it carries out.

I haven't seen a very big offering in Europe for this type of modems and the ISPs I interacted with have either gone with a well positioned router with inbuilt 4G or an external cheap alternative of the likes I mentioned above.

I not this is not exceedingly information, but I hope it helps somewhat! 🙂

Please keep in mind that what I post here is my personal knowledge and opinion. Don't take anything I say for the Holy Grail, but try and see!
Appreciate who helps and be respectful of every opinion and every solution offered.
Share the love, especially the Meraki one!
0 Kudos
Reply
Subscribe
In response to AlexG

We've had similar issues with the USB Modems from Verizon.  More often than not they're not working when we need them so they're of very little use in an outage.  I've looked at Cradlepoint as well, but as you mentioned they are too pricey for me to justify using one as a modem at each site. I did find these modems from Digi that might be worth a shot.

I have actually come across those modems once before. Do you have any experience with them?

No, but we have used other Digi products for serial communications for the past 20 years.  Always been rock solid.

I know you said you are moving away from USB connected devices but... Checkout the Inseego (Formerly Feeney Wireless) Skyus DS. They have broad US, Canada and International carrier support. It is the only LTE failover we (https://cohort.ca) deploy and they are Meraki Certified.  They have been rock solid and we have sold a bunch of them here in Canada and everyone loves them. There are also many antenna options that you may consider.

@PhilipDAth I don't believe so according to documentation I have at my disposal but would be a question better directed to Inseego.

Inseego has a fantastic support department. Also being that Inseego Skyus DS is "Meraki Certified" they (Meraki) may be of assistance but I would contact Inseego first.

I'm going to guess this is related to the APN being used.  See if their is an APN that provides direct Internet access without a firewall.

I deployed 28 Inseego Skyus DS with Verizon. None of them are causing any issues at all for last couple of years.

CradlePoint was the one that I used use but Skyus DS is 1/3 price. One of the drawbacks is that I cannot monitor Skyus DS from external monitoring tool.

There should be a new Skyus SC product coming out this month - with support on the MX line that has onboard connection management logic. This device will allow you to monitor and support the connection outside of the Meraki Portal.

Check out the Skyus SC line

I did catch the new launch. It's definitely exciting that we'll have that as an option, but ripping out 900+ devices to replace with MX68C's is not feasible in the near future. We're going to continue looking for alternate options right now for our MX60/65 environment.

Utilizing SD-WAN functionality seems like a far better solution than continuing to hold out for fixes to the USB modem logic. I just ran a script against the API again today for our environment, and I'm seeing 64 modems that list their state as 'Ready' with a 192.168.1.2 internal (non-routable) IP, along with 58 modems that list their state as 'Connecting'. That's a 15% failure rate, which is unacceptable.

I agree, it's not going to be cost effective to rip and replace especially when the new models with built in cellular are nearly twice the price as those without.

Hey AlexG - I hope you are doing great! What USB modem are you using ? I am curious about the overall experience with the USB fail over you described.

Hey guys! For what it's worth to anyone else seeking a solution that is both cost effective & simple to setup here's what I did to overcome some issues with my Verizon Mifi 730L (latest Meraki USB compatibility chart for example).

Plugging in the newest USB 730L device(USB ID of 1410:9031)into the back of a MX64, MX100, Z1, Z3, none of that works, it simply won't show up in the dashboard as a Cellular device due to the incompatibility of the USB ID. I shopped around for other modems ON the list, but they were several hundred dollars, Meraki says they didn't have any plans to release an update to allow this to work.

I glanced over at a Raspberry Pi3 I had sitting on my desk....and it hit me.  🙂  I bought a Raspberry Pi3 B+ kit AMAZON a few weeks ago to do some Zabbix monitoring with, but ended up using this in a test scenario and it works brilliantly.  Also I'd recommend using a USB powered HUB, I've noticed some Pi's now basically rebooting the USB MIFI when plugged directly in. This isn't ideal, but for a tertiary or secondary backup for an ISP in a pinch this works well until you get the main connection sorted out again.

In short, Install Network Manager  on your PI.  Launch Network Manager from the start menu, Label each connection accordingly if you wish. Choose the Wired connection, under IPv4 settings, change the "Method" to Shared to other computers. 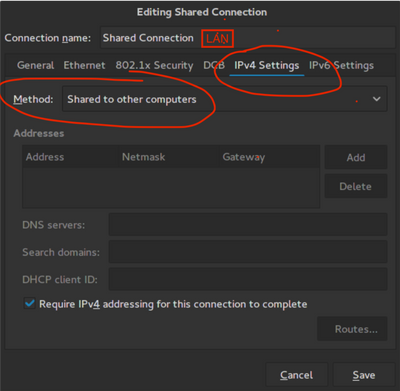 YOU MAY need to do this below if your PI doesn't automatically use the MIFI as the primary network interface.

Once you have that done, edit your /etc/dhcpcd.conf file. Based upon what interfaces you have and what they're doing, you'll need to change the interface metric on both, to ensure your gateway/traffic always attempts to flow out of your MIFI device, not your local LAN connection(the one you're sharing)

In my case, here is what I have:

at the bottom of the/etc/dhcpcd.conf file insert the lines below according to what interface is your MIFI (make its metric LOWER than the WiredLAN), then save, reboot the pi.

once rebooted, open a terminal window after the MIFI is connected to your usb hub, then the hub to your pi..  run this command below.  This will show you what default interface traffic will flow.

Next, simply plug in the LAN cable to a  WAN port on a router, laptop, etc. make sure that interface on whatever device you're plugging in has DHCP enabled on that port... once connected, give it a few seconds and check to see if you can get online! That's pretty much it.

Can't be beated in both price and complete LTE band coverage.

Our company use Netgear Nighthawk M1 and M2 down in Sydney Australia.

One thing I like is that it has a LAN port that support passthrough mode (no NAT) - the 4G public IP address will land on the Meraki MX internet interface.

Maybe there is a US version of nighthawk?

We've been using Microhard cellular modems after moving away from Cradlepoint.  They are a Canadian company but have various regional offerings.  We use the IPn4Gii model across different IoT projects and conntinued using them as our secondary WAN connection and most locations.