I found a need to create a portable WIFI solution that is easy to setup, easy to take down and only needs AC power and reliable cellular service. The use case is for temporary events, both indoors and outdoors, where WIFI is needed for devices like Point-Of-Sale registers, digital tickets, digital signage and general internet access. Some of the possible events are farmers markets, little league tournaments, food truck courts and golf tournaments.

I used some off-the-shelf television antenna tri-pod mounts and masts as the platform to mount the equipment on.

They are cheap, light-weight, durable and easy to transport. 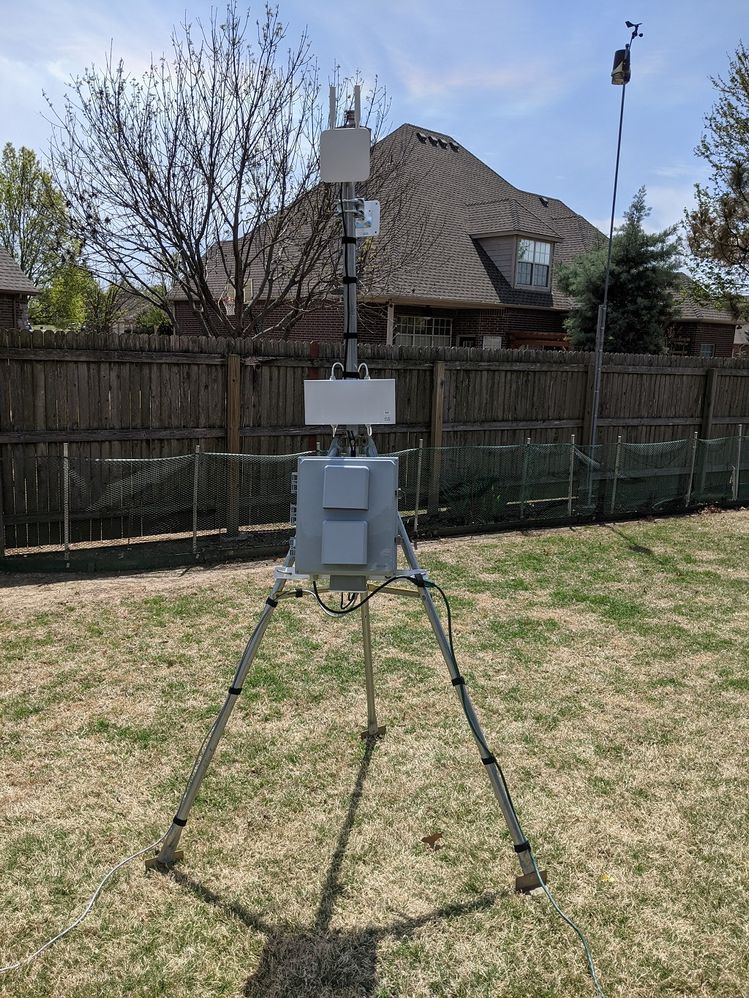 I needed a water proof enclosure to house the PoE switch. I used a Ventev climate controlled cabinet that I had from another project. The cabinet has an AC outlet built in along with a small fan to vent it. I removed the heating element from the cabinet as the switch will keep it warm. I used an APC surge protector to provide some power protection for the electronics. I used a small, cheap, unmanaged, 8 port 100 megabit PoE+ industrial grade network switch. The switch also has a single gigabit non-PoE port. I would have used an 8 port MS120 switch, but I was concerned about it's environmental specifications and size. The other Meraki devices provide plenty of visibility into the local network. 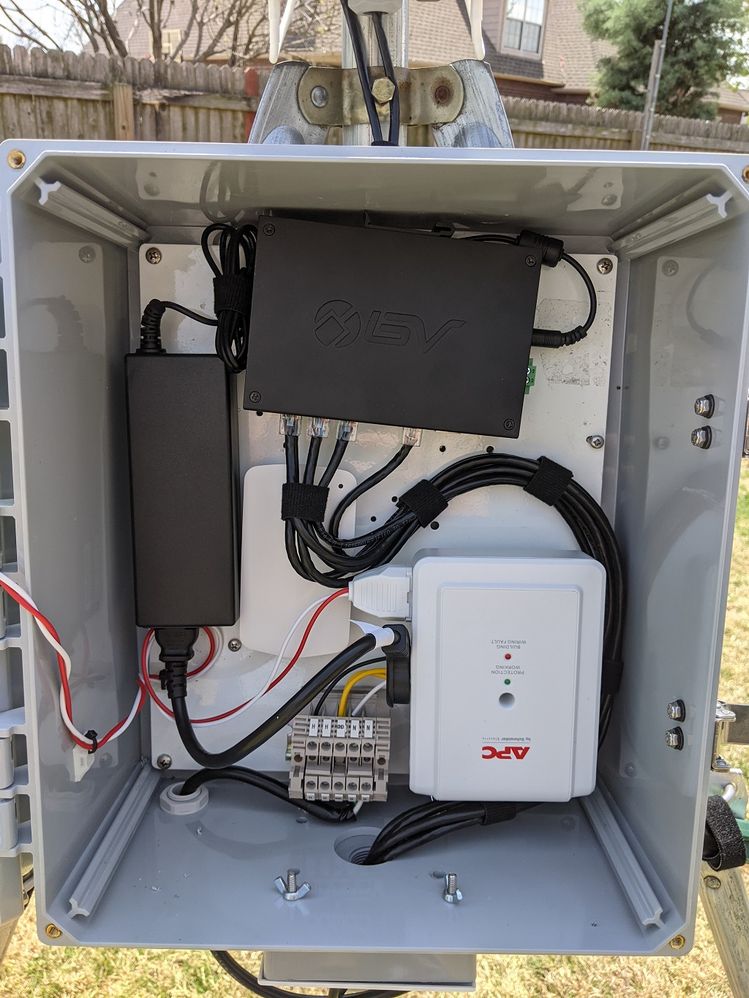 Inside the Base Station

I had an extra MT10 Temperature and Humidity Sensor that I put in the cabinet. The fan is drawing heat from the cabinet out of the top inlet. This means ambient air is being drawn in to the cabinet from the bottom inlet. So the MT10 is measuring the outside air temperature and humidity. So this system also functions as a rather expensive weather station too. 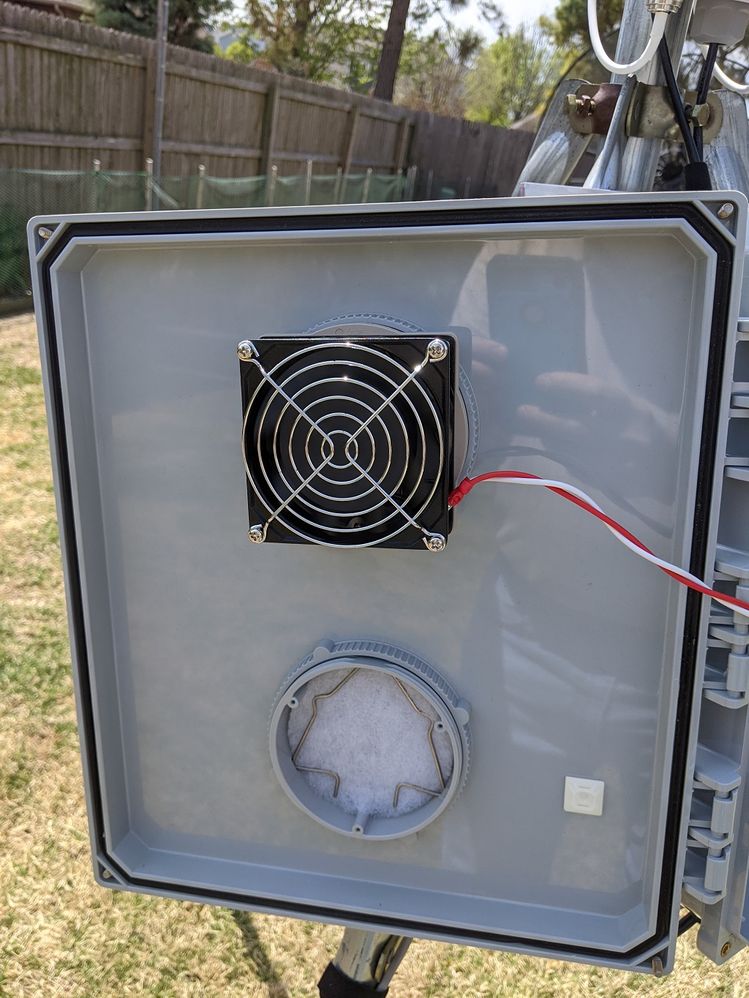 Base Station fan and air filters

I installed a small outlet box on the bottom of the cabinet and used a 6 port RJ45 plate for it. I wired one of the ports (blue jack) to the gigabit port and 5 more ports (white jacks) to the 100 megabit PoE ports. This is the only part of the project that is not weather-proof. The gigabit port could be connected to a local broadband internet circuit if it were available. I do not plan to the leave the system out in the weather for extended periods of time, so this was an acceptable solution. 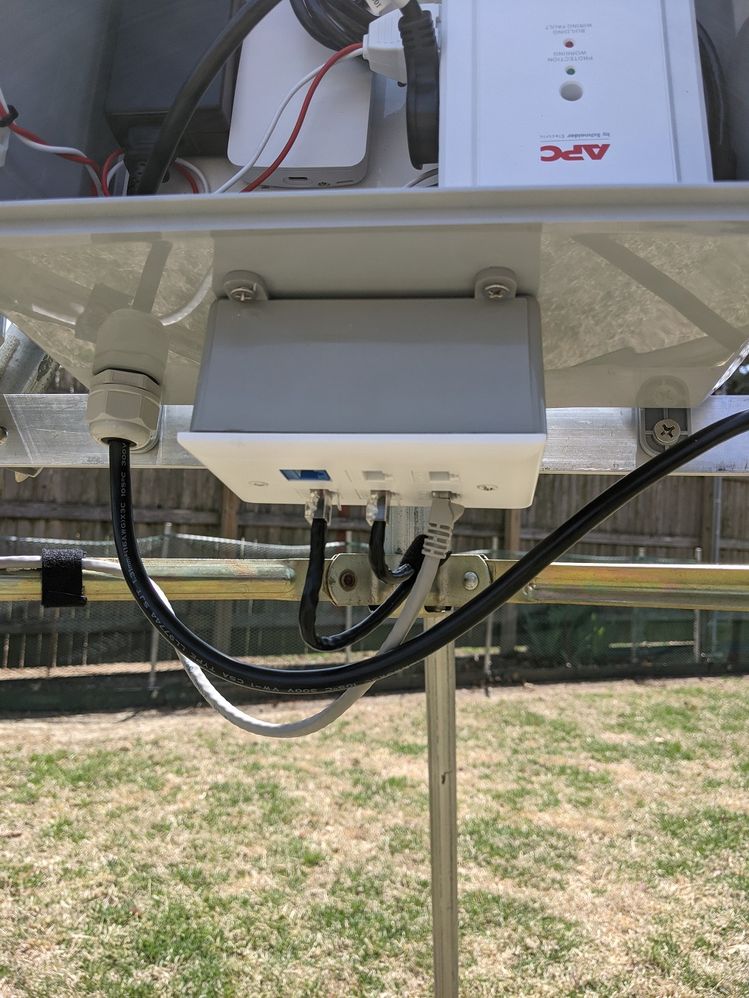 I choose to go with the external network ports so that it would be easy to connect and disconnect network devices to the base station without having to open the cabinet. The network jacks and wire are all Category 6, although 5E would work too. 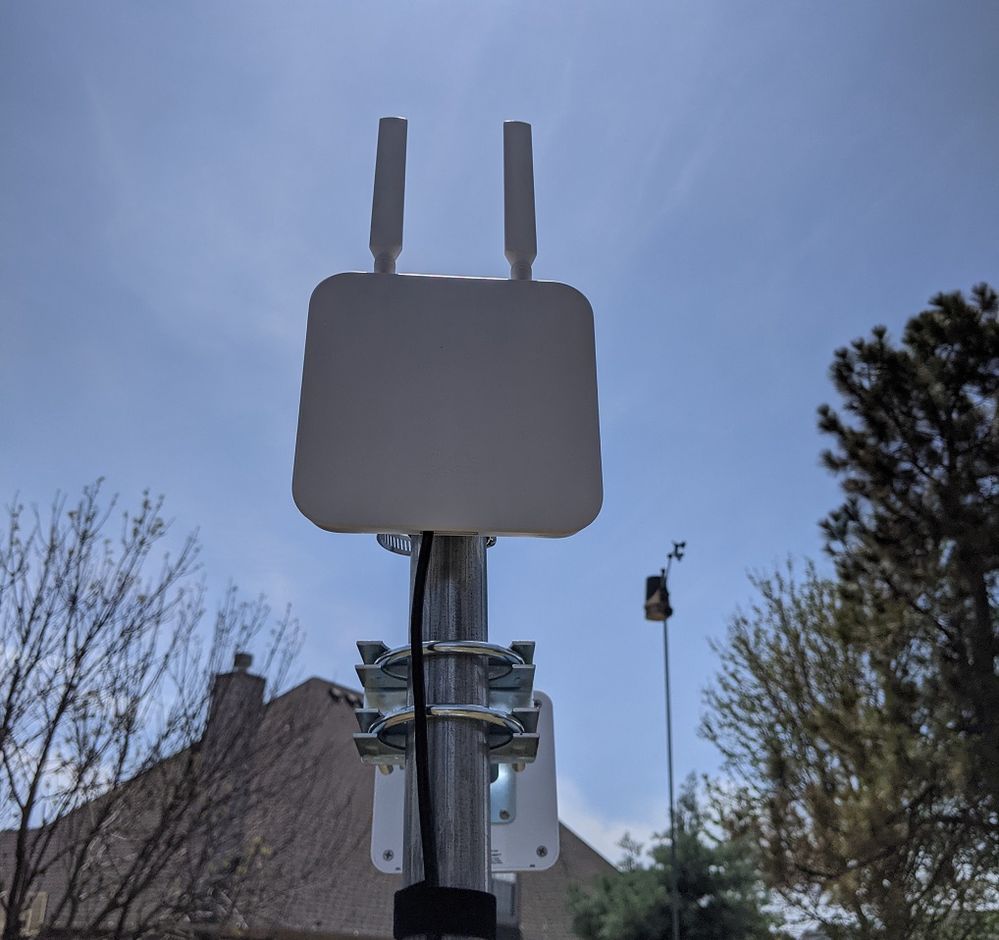 I installed a Meraki MG21E Cellular Gateway on top of the base station to provide internet access. When the new Starlink satellite internet service is available, I could remove the MG21E and install the Starlink dish on top of the poll. I used a Meraki MR86 WIFI 6 Outdoor Wireless Access Point for the WIFI access. I realize the MR86 is overkill for this project and the MR76 would be a better choice, but the MR86 APs were in stock and the MR76 APs were not.

An MR70 AP would also be an even cheaper option. 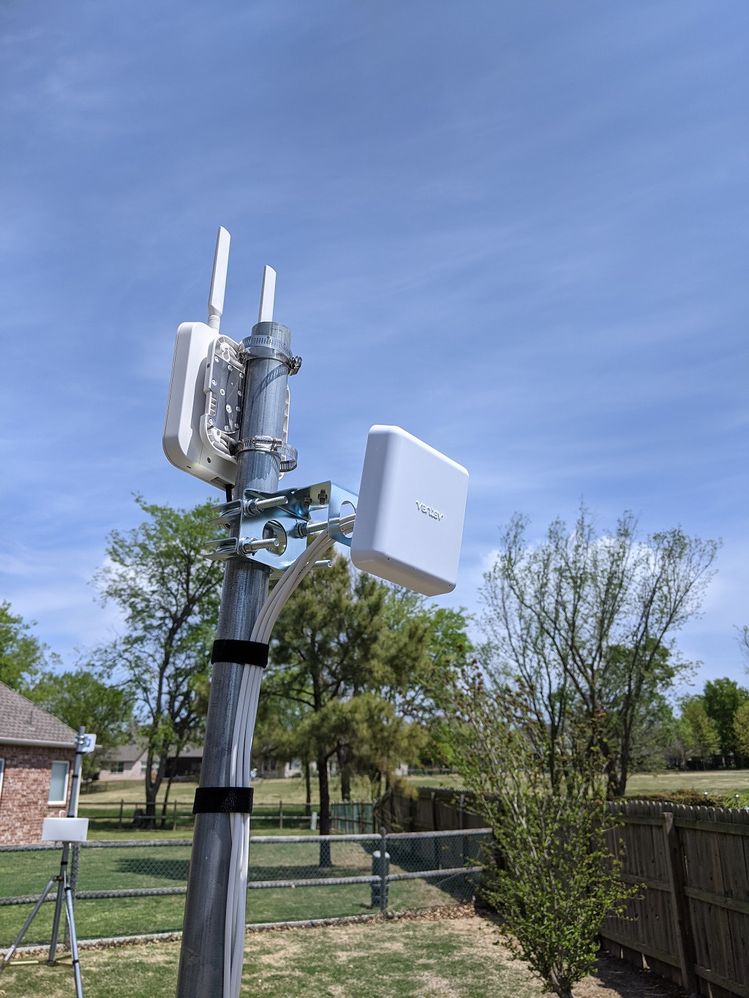 I went with the Ventev micro patch antenna to direct the wireless network coverage towards a specific area. All four leads are dual band and the antenna is much smaller and cheaper than a pair of the Meraki patch antennas. The patch antenna could also be replaced with an omni-directional dome antenna for a wider coverage area. 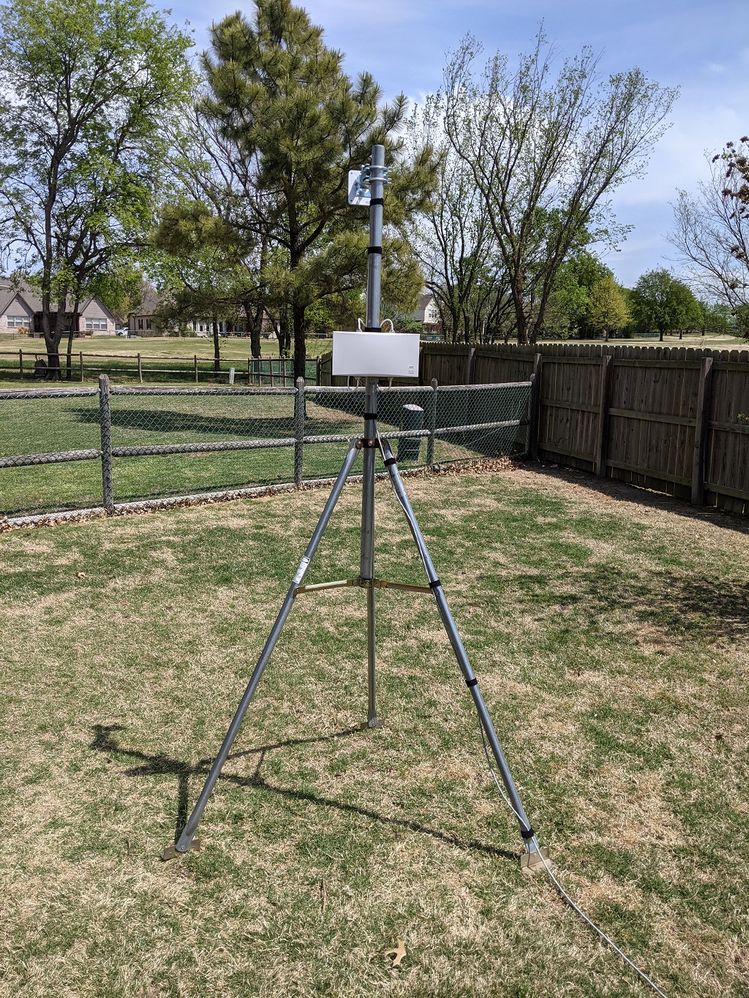 I setup an additional station to provide better coverage for larger events. It draws power and internet from the base station. I used the same AP and antenna for it. I can theoretically run four of these from the base station, as long as they are within 300 feet or so. I could also power the additional stations with a PoE injector and rely on the Meraki Wireless Mesh access to.

I added some firewalls rules to the wireless SSID to block bandwidth consuming services like file-sharing, peer-to-peer and web advertisements. I used traffic shaping to limit the wireless users to two megabits of bandwidth. This should be sufficient for most users and allowances can be made if more bandwidth is needed.

Could do with these in our area where rogue traders are fly tipping in the country lanes. Add a camera and we can monitor who’s coming and going and hopefully catch them in action

@UCcert you are absolutely correct, this platform will support one or more cameras too.

Great project! Thanks for sharing.

I tested the system with only one MR86 AP at an event last weekend and it worked perfectly. It was able to provide reliable service in an area that was roughly 100 x 200 feet. The throughput from the MG21 was a little bit better than what my cell phone was able to provide on its own using the same cell phone carrier. 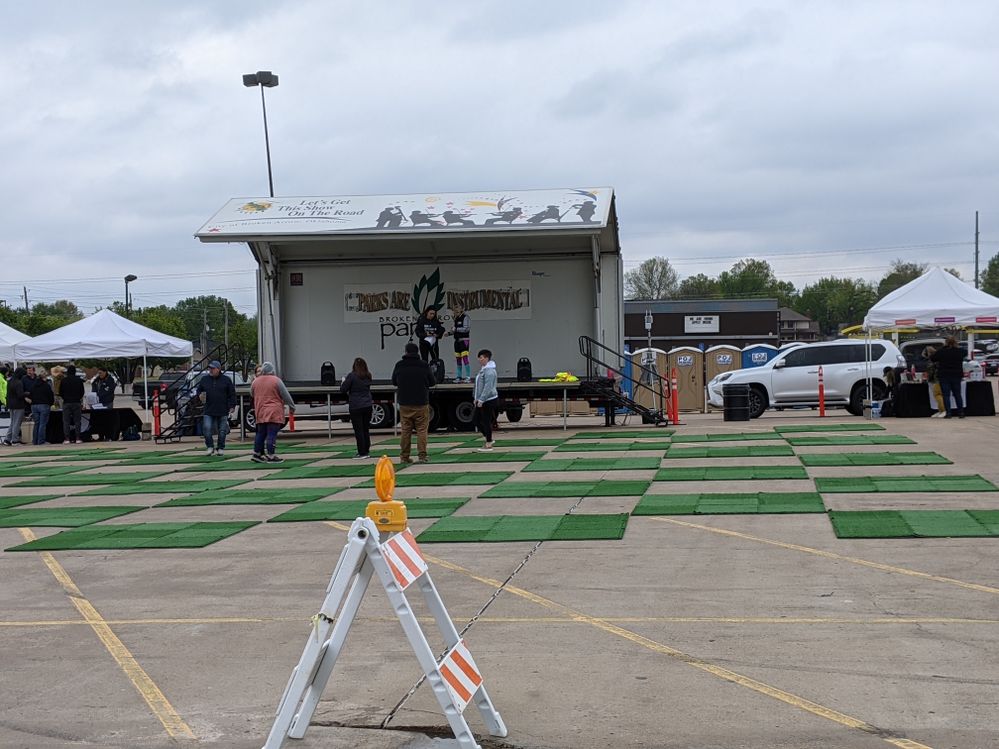 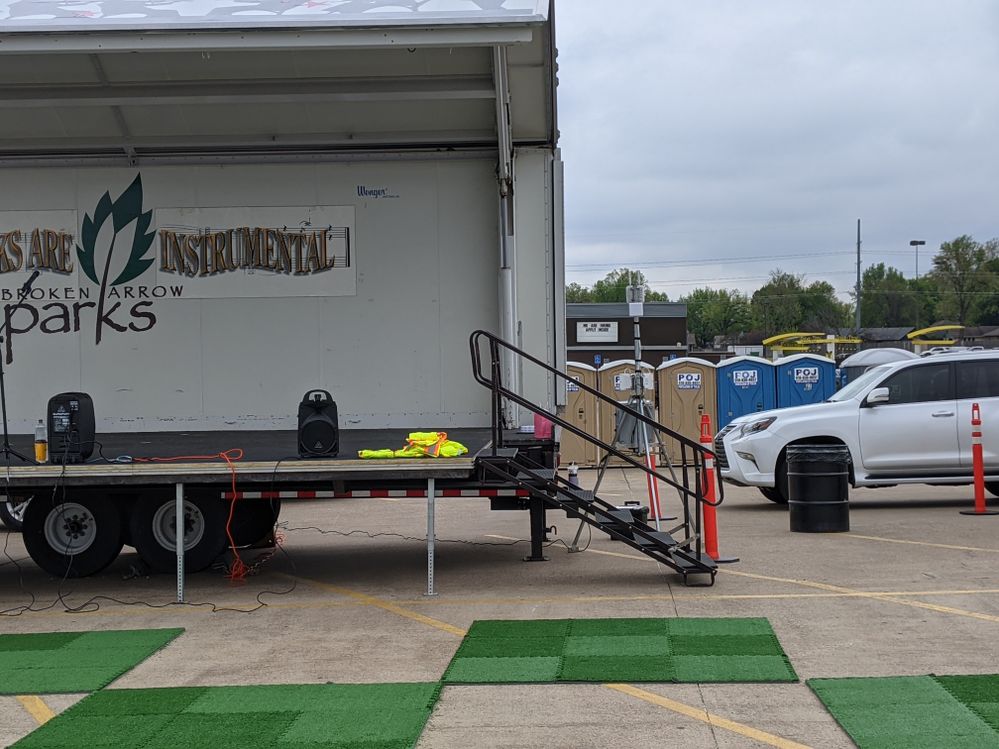 This is beyond cool!  Nice work!