We use Wifi to provide networking on moving irrigation booms - 65 of them. See the attached image. We have a separate SSID and vlan for these moving devices. This system has worked dependably on a Ubiquiti wifi system, but the Ubiquiti cloud key/module has been flaky.

We upgraded a portion of our system to a Meraki MR76 WiFi system using the same ssid/vlan settings, and have had mixed results. The native vlan (vlan1) has been rock solid. The irrigation vlan (vlan2) is where we're having issues. The settings are the same in Meraki as Ubiquiti as far as we can tell.

On the Meraki system, we are sometimes able to ping the devices (from the server) behind a Netgear router, but are unable to ping the router or access the Web interface. Vlan 2 is entirely static IP, since all the communication from server to device is IP based. It puzzles me how we can have devices with a static IP address, and some are reachable by ping and others are not. Wait a bit, and we might be able to ping the devices that were not "pingable" a few moments ago.

Any help would be greatly appreciated.  Thanknks 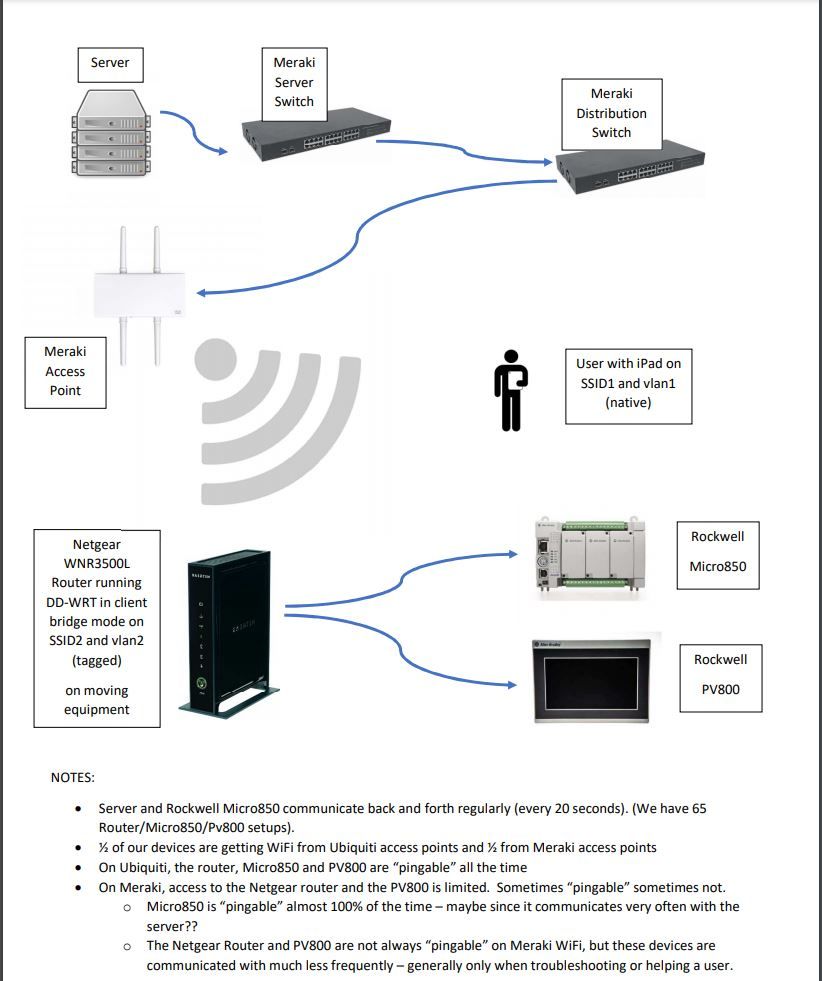 Have you configured a Trunk on the uplink from the Meraki switch to the AP with the Native vlan set?  Then on your SSID you’re Tagging VLAN2?

What are you seeing in Wireless > Health?

All ports on both Meraki switches are configured as Trunk on the Native vlan.

And the SSID is tagged as VLAN2.

Can you check the wireless profile assigned to your meraki ap's.

In would try this:

Thanks.  We tried doing this (band steering was already disabled, but we changed all the others)