So Im trying to troubleshoot some issues on a network with a MX85.

In the eventlog for the MX85 I for example see "device: port3, carrier: false".

What boggles me, is that if this Port3 losts its carrier, then it would mean that WAN1 was down, and that I should then see a "Primary uplink status change" in the evenlog as well (since this MX has two running WAN links - not dual active).

I also see one or twice a "device: port4, carrier: false" and that would mean (according to the dashboard UI) that WAN2 would be down ?

I then looked at the downlink switch, and on the lldp/cdp neighbour information of this switch it says : Meraki MX85 - fw01 / 6 - but there is nothing connected to Port 6 on the MX85.

(the other downlink switch says : Meraki MX85 - fw01 / 7 for the lldp/cdp neighbour information).

The actual dashboard UI ports are 11 and 12.

So what can I conclude about this ?

Is the eventlog information = the UI truth ?

Or is there an "offset" somewhere, because the lldp/cdp information is clearly not equal to the UI. 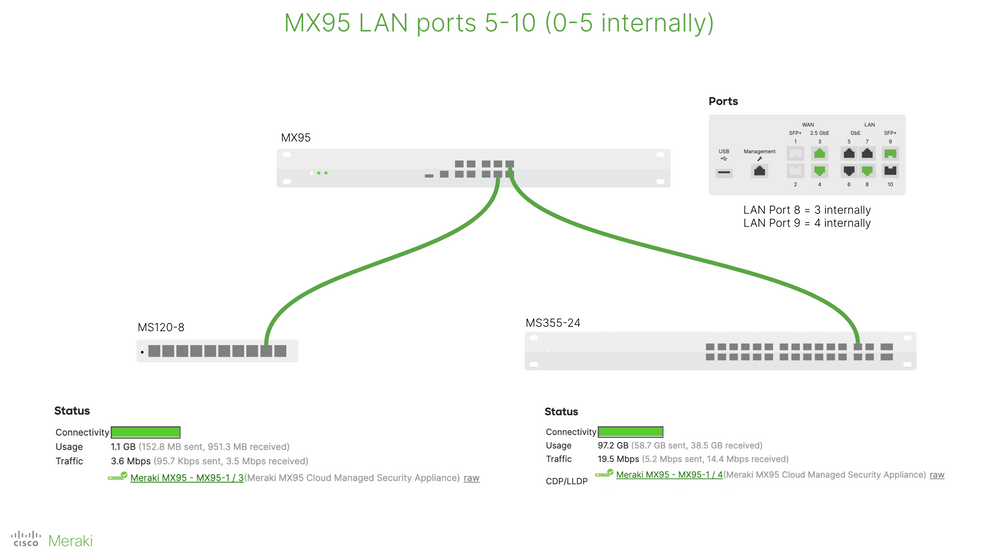 My first idea was that it could somehow relate to the port mapping that is also used in templates:

So, for a MX85 the LAN ports from an ifconfig or LLDP perspective would appear as LAN 0-9. Using that numbering your info of physical ports 11 & 12 would equate to the internal numbering scheme mapping to 6 & 7.

Ok, that makes sense. Is it documented somewhere?

Not sure. Added to my to do list for next week to see if it is documented. And if not, I will create it.

But it's probably the case that all MX models are 0,1 for WAN ports and 0-x for the LAN ports.

There’s a bug on the MX84 in that any LAN port shows as 0 in LLDP. No other models should be affected.

i.m.o its a bit confusing, even more when you also trow in the event log port number that is also different from the dashboard port number and the lldp number.