Mixing MX wireless with MR isn't ideal for a variety of reasons, so using the dedicated MR32 will serve you well.

All configuration for the MX65W's wireless configuration must be done under the Security appliance > Wireless settings page. There, you can see that Meraki Authentication is not currently a supported SSID auth method. 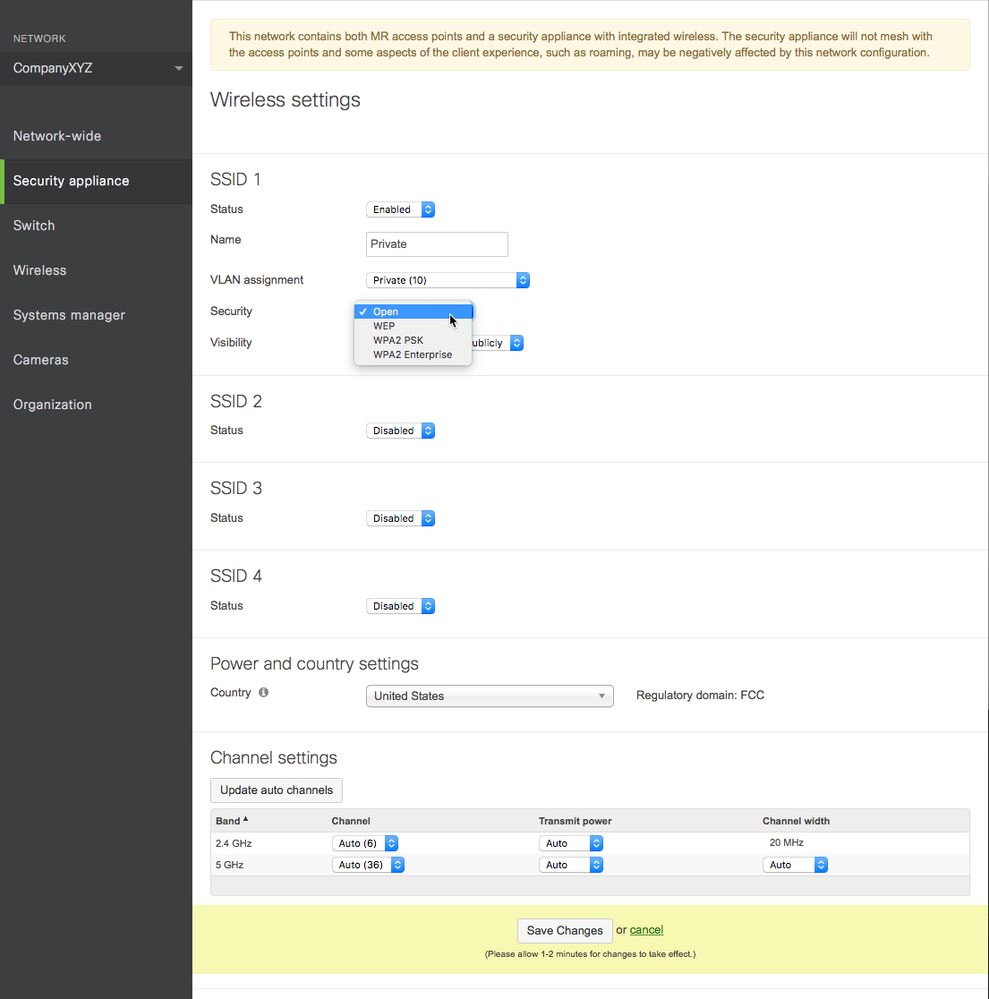 My dashboard does show "Use Meraki Authentication" when "WPA Enterprise" is selected for the Security setting.

What I may do, instead, is move my MR32 to a more central location, and then turn off the wireless of the MX65W and just rely on the MR32.     I had purchased the MR32 to cover a dead spot with great success, but I had not until now wondered if the MR32 has better range than the MX65W and could take the place of its wireless.

Thank you for your response!  I absolutely love the Meraki equipment and dashboard!

Mixing MX wireless with MR isn't ideal for a variety of reasons, so using the dedicated MR32 will serve you well.

I will move that MR to the central location near my MX65W.    I had purchased the MX65W with the idea that it could do everything - wireless AND especially security and it CAN and does both SO VERY well.   Its just that I had one small area in a far corner that was not getting covered.  Hence, I purchased the MR32 and put that there.  This solution works FANTASTIC, but - as you'll note above, I decided I wanted authenticate access now, and that's were I was running into the problems.

Because my original mindset was to keep the MX65W as my "master" and the MR32 was just a satellite (so-to-speak), I didn't (as I noted above) previously consider that the MR32 might replace the wireless of the MX65W completely, as I can imagine that the dedicated AP circuitry and antennas in that unit are likely beefier than what's in the MX65W.   Hence, I will try that this upcoming weekend or next.  It is also obvious that in dashboard, there are far more options for wireless optimizations and configurations for the MR32 than the MX65W.  Let me say, however, that for smaller spaces, the MX65W works exceptionally well and could easily stand-alone!    Again, thanks!

During this holiday break, I was able to move my MR32 to a central location and turn off the MX65W SSIDs. The MR32 appears to not have quite the range of the MX65W, but is close and is working better in the sense that it has a richer feature set. (This seems to make great sense to me: A small business might use one MX65W to cover the entire store and therefore not need multiple APs, hence, a greater range on the MX65W is perfect. An MR32 might be more likely to be used with additional APs and therefore need the additional features that include seamless roaming and meshing, etc.) One thing that I am still puzzled about that I wonder if I've made some mistake on, but haven't figure out yet: When I use the WIreless Diagnostics on my MacBook Pro, and do a scan, I see that there are two wireless networks coming from the Merakis (either the MR32 or MX65W) (with no network names, but BSSID's that indicate that the Security is WEP)! What might those be? Are those the 3rd radios used for rogue AP protection? Are they okay that they are WEP?
0 Kudos
Reply

Not ideal but still we don’t have choice as “Meraki Authentication” 802.1x is not supported on WiFi capable device MX or Z.

We have no other way then to add an MR AP ... even if it double the cost .

Any improvements in the roadmap planned ? Adding an Extra MS for a small office is really overkill