Hey everyone, I'm new here.  I'm just getting into the Meraki world with an MS220, MR33 & MX65 for our home office.  I'm in Canada using Bell as my ISP with 500mb service.  I connected my HH3000 (with DCHP enabled) to the MX65 WAN1 port and it just started working.  No configuration needed.  I realized I was double NAT'd though, so started to look at how I could disable the firewall or put the device into bridging mode.

Bridging mode isn't available, so I looked at port forwarding all ports, but quickly found out that I can do PPPoE passthrough - which I'm told bypasses all firewalls.  After much research, I was told that I could connect via PPPoE using my Bell b1 username/password using VLAN 35.  THIS DOES NOT WORK.  Settings below: 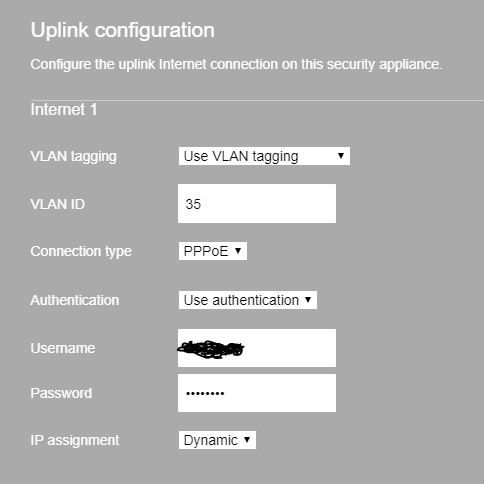 Funny though, NOT putting the VLAN tagging worked! 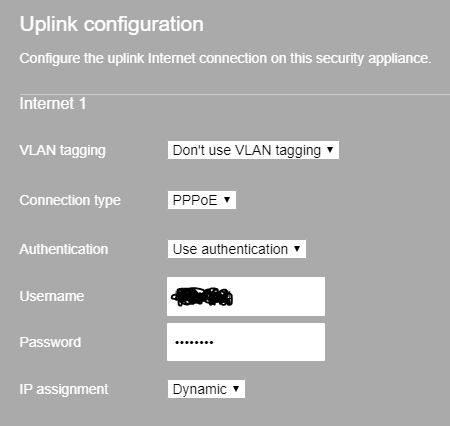 At this is stage, I realized that the HH3000 Bell modem still has it's own PPPoE connection.  I read that you could have 2 active PPPoE connections at the same time, but still don't understand how that impacts performance.

Currently, when connected directly to the HH3000, the local Bell router speed test shows 550mb speeds but my Speedtest.org clocks in at 250mb.  When connected to the MX65, I get the same Speedtest.org speeds of 250mb (which makes me think it's Speedtest.org).  If I disconnect the HH3000's PPPoE connection, it doesn't affects speeds at all.

I'm still curious why I'm getting 550mb speeds directly from the HH3000 Bell modem, but half of that with Speedtest.org.  So, I've ordered a Gigabit Ethernet Media Converter with open SFP slot https://www.amazon.ca/gp/product/B06XPY2Z2R.

I plan on taking the SFP out of the HH3000 modem and inserting it into that device to bypass the Bell device completely.  I'll see if that increases speeds.  That device should arrive today, so I'll update this thread.

Hope this helps anyone who may be using a Bell Home Hub 3000 modem/router and would like to connect it to your MX device. If anyone can explain the double PPPoE connection thing, that would be great.  Loving this community so far, thanks!

> I get the same Speedtest.org speeds of 250mb

You can also see this in the dashboard under:
Security & SD-WAN/SD-WAN & Traffic Shapping

under the uplink configuration at the top.

The device might be doing PPPoE bridging but that doesn't mean it is also bridging the VLAN tag.  If the MX ends up with a public IP address on it and you don't need a VLAN tag then run with that.

Quick update:  I installed the SFP to RJ45 media converter.  Using the same settings as before, without any VLAN tagging, and it did NOT work.  I had to manually add VLAN 35 and it worked right away!

Anyone see a reason why I shouldn't just use the Bell HH3000 as my media converter?

> I get the same Speedtest.org speeds of 250mb

You can also see this in the dashboard under:
Security & SD-WAN/SD-WAN & Traffic Shapping

under the uplink configuration at the top.

The device might be doing PPPoE bridging but that doesn't mean it is also bridging the VLAN tag.  If the MX ends up with a public IP address on it and you don't need a VLAN tag then run with that.

I doubt it makes much difference which media converted you use.

@PhilipDAth - Thank you, thank you!  That makes so much more sense... haha

I'll return the media converter and call Bell to lower my Internet speeds to match the MX65 limit.  If I find myself an MX67 or MX68, I'll increase my speeds back up.  You just saved me a few $/month on my Internet bill 😉

Did you also add the VLAN 35 to the "Addressing and VLAN's" tab on your MX, as well as the configuration of the PPPOE connection?

I have the same setup, but authentication is not working.

Hey @mhurst , nah I don't have anything in my "Addressing and VLANs" area for Bell.  Everything is done at the PPPoE connection screen.  If the authentication isn't working, I'm guessing your password is wrong.  You can reset your B1 account password through the online Bell portal, but know that you'll have to update it on your Bell Home Hub as well.