Anyone else having this issues where the MX devices are starting to show MDNS naming and won't pickup the clients? Nothing changed on my network and there seems to be no commonality between the clients that have a different naming convention. Meraki has been on this for two month and they have been pretty much none existent. 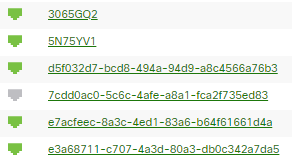 Any thoughts would be appreciated.

Many, many, many people have reported this issue.  I think we can officially call it a club.

Short answer - nothing you can do about it.

They have been avoiding me. I figured something what dodgy. What a fantastic issue to come into and find such sad support. Also found that in a MX network with a Meraki switch the bandwidth reports are way off. They said they are aware and are working on it. Basically having a Meraki's is the worst right now.

One easy solution I’ve found is to install the Apple Bonjour for Windows client on clients affected. It then reports the correct name in the dashboard.

That is actually the expected behavior if your devices have mDNS enabled. The names on the Dashboard are displayed based on whichever of the following exists, in order.

To use the DHCP hostname instead of the mDNS name, on Windows for example you can disable mDNS: https://www.blackhillsinfosec.com/how-to-disable-llmnr-why-you-want-to/

If you found this post helpful, please give it kudos. If my answer solved your problem, click "accept as solution" so that others can benefit from it.
2 Kudos
Reply
Subscribe
In response to MerakiGeoff

Just curious...if you disable mDNS/LLMNR via GPO as the post at:  https://www.blackhillsinfosec.com/how-to-disable-llmnr-why-you-want-to/ shows, will clients in the Meraki Dashboard update themselves to their correct netbios hostname instead of using the mDNS name?

I know that many people have complained about this, and I know the standard response (e.g. as posted above by MerakiGeoff on 12/10/19).  But has anyone heard any updates that point toward a true "fix"?

As of last night, maybe only about 10% of my Windows 7/8.1/10 clients were showing up as their mDNS names, and the rest were showing (as desired) as their host names.  It had been like that for probably about a month since an office-wide extended power outage.  Today, it is randomly up to about 50% that are showing as mDNS.

There weren't any Windows updates last night, nor anything else I can think of which should have caused a change in behavior.  My only other thought was that maybe a Chrome browser update did something weird, but it looks like the stable release of Chrome hasn't been updated in about a week now.

I don't want to manually configure all of the host names in the MX, and I don't want to install Apple Bonjour for Windows as a poster above suggested.  Is there a proper "fix" in the works, or a better workaround that doesn't require unnecessary software?

I'm also interested in a real response as to why this would be difficult to implement or why the mdns client name is some kind of benefit to me.

This design limitation really wrecks the "at-a-glance" nature of the interface.