Found a AP that had a green light but the switchport showed down hard and AP was off line. I took the AP in the IDF and it worked so suspected a cabling issue. Stuck in back on the ceiling and scheduled a cabling vendor which was book out 10 days

few days later the AP comes online, had a couple times over the next few days where it showed off line for a bit.

But now it has been up for 6 days and no drops, even had Meraki support verify its not bouncing anymore.

First has anybody seen this and 2nd could it still be a bad cable?

Well... If it works since a couple of days... I would cancel them 😄 Or find another position for the accesspoint near to this position.

Never had this "problem" so far. 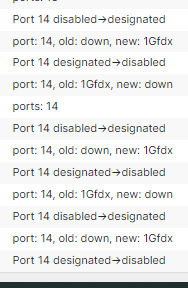 When it is up, you can do a cable test through the dashboard... Indeed it is not the best cable tester, but it works for me most of the times... 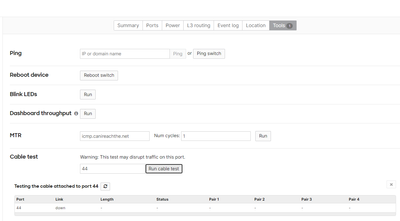 Or select the port and scroll down to:

Yes and it passes and looks stable..Leaning toward cancelling having the guys test the cables. We have to pay them to come out.

Well... If it works since a couple of days... I would cancel them 😄 Or find another position for the accesspoint near to this position.

Never had this "problem" so far.

Those log messages are just showing that the port was bouncing.

It looks to me like you have a cable problem.  Have you run a cable test on that port?

As for the AP having power while the port shows down, I've seen that before, both from cable failure and switchport failure.  If one of the data pairs is open, but the spare pairs are OK, the device can negotiate power but never link up.  Looks like this in the dashboard:

And here's the result of a cable test on that port:

Looks like you may have an intermittent problem with a data pair on that cable.

That's what mine was doing also but now seems happy. My concern is maybe the cable is border line bad.

Still debating cancelling the cable guy but since they have had soo many wireless issues I will probably keep it scheduled to rule it out. Its our corp head quarters and I have found and fixed soo many issues its laughable. Like found several AP's where they replaced them but never added the new Serial number to the system 🙂

Both cables tested good, honestly not sure. I have read a few post about 14.33 release causing weird issues with ports but the AP is up and stable. Will watch it and may upgrade to 14.33.1 if it acts up again

Well I am about to start drinking. Plugged the APs in and it came online. Drove home and had a few meetings and now it's off line. Cable now shows unknown..Only thing I know left is swap the port on the switch with a working one and see what happens

Hoping somebody has seen this before..When it was down cable test said unknown but not ITS WORKING for some strange reason and cable test passes.

I am seeing this in the logs

Those log messages are just telling you that port 14 went down (state changed from 1Gfdx to down), and when it did it was marked as disabled in the RSTP table (because it is down and has no path to the root bridge.)

It really sounds to me like an intermittent cable issue.  It could be a port, so I'd definitely try moving the AP to another port on the switch, but a cable/connector problem seems more likely.  When the cable people tested the cable, did they test all the way from the switch to the AP?  Could be a bad patch cable.  I've also seen bad keystone jacks cause intermittent problems.

Is there another network jack nearby that you could move the AP to?  That would help rule out cabling problems.

What makes it hard to troubleshoot is it up now and has been for 3 hours..

They tested from end to end with a fluke tester..

Tomorrow morning I am going to swap the ports on the switch.Depending on what happens I will swap the AP's

Meraki support also said its strange but seems to suspect a bad AP..I replaced one that was doing similar things but I do have a spare if needed.

Wanted to send an update. Yesterday I physically swapped the suspect with a working AP in the ceiling expecting to get a direction. The only thing I did was pull one AP down and move it. Cables ports everything else stayed the same

Strange part is AP-14 ( weird one ) came up instantly and they have both been solid for 24 hours.

My only hunch is the AP is looking for a certain voltage and maybe Its getting a tad under so it goes off and one? Just a guess. Meraki said to watch it 24 hours and we can go from there

My only hunch is the AP is looking for a certain voltage and maybe Its getting a tad under so it goes off and one?

After switching the port or or maybe connect it to a different switch, for testing, the AP seems to be faulty.

Or it will go on working, the initially port seems to have a problem, as the cable tester said all is fine.

Just wanted to post a follow up..Its acting up again and pointing to the cable..Even through it tested clean I am havign them replace the ends.