VLAN is not being assigned properly with Group Policy

VLAN is not being assigned properly with Group Policy

I am trying to get a set of devices to go to a specific VLAN. For some reason, even though I believe I am doing it correctly, it doesn't seem to "take affect" even after a reboot of the Meraki and the device I'm trying to assign a specific VLAN.

As you can see above, I have the policy set to "Phone VLAN", and the VLAN is also apart of the same group (below) On the right you will see the device is using "VLAN 10 - Default" not "VLAN 9 - voice", even though it should be through the group policy. The device in question is apart of the "Phone VLAN" group. Everything should be pointing towards overriding the VLAN its assigned to the group policy its on, but its not. 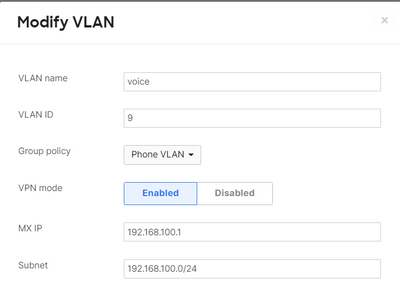 Possibly Unrelated: I also attempted to set the device to specific IP (static) to force the correct DHCP format (preferably would come from VLAN but I was just trying stuff) and I couldn't even get the device to grab the new static IP. Its like the changes I'm making in the Meraki are just being ignored by the devices, even after reboot of both the Meraki and the device I'm configuring.

Thank you for any advice you can give.

You don't need a group policy for this (in fact, they won't work for this).  Instead, configure the Meraki MS phone VLAN option.

Are you trying to assign dynamic VLAN via group policies? Could you please give us more information?

I'm honestly a bit in over my head with this stuff. But I will try.

How this network needs to be setup, is all the phones need a IP format as "192.168.100.X" because that is what the onsite PBX system uses. Every other devices (printers + stations) need to be on the default custom DHCP "77.77.77.X". The people who set this up was using VLANs to accomplish it, but I don't think they did it right.

I'm sorry if this doesn't answer your question. I'm pretty new to intermediate/advanced networking stuff like this.

The group policy is not for this purpose, so I think that you will not achieve it with group policy.

I tried to follow that best I could, but I got a little confused. I only have 1 group policy, and on Network-wide > Monitor < Clients, the "test" device I am trying this on doesnt use "normal" it says "Phone VLAN" as intended.... But lets back up.

Let's completely forget about group policies for now, as you said it wasn't intended for this.

Who are your DHCP server and gateway? You need to use VLANs. I need more information about your network. A topology will help a lot to understand. 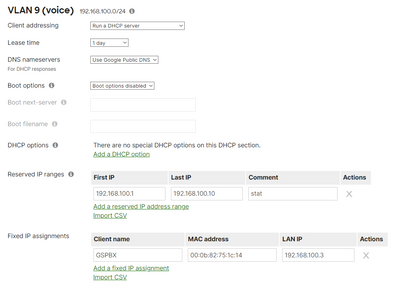 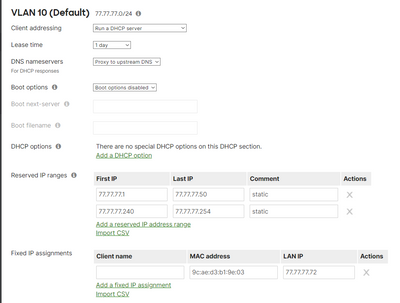 Above is the only information on my Teleworker Gateway > Configure > DHCP page.

And this is the only information I could find for "gateway" which is on my Teleworker Gateway > Monitor > Appliance Status > Uplink page. 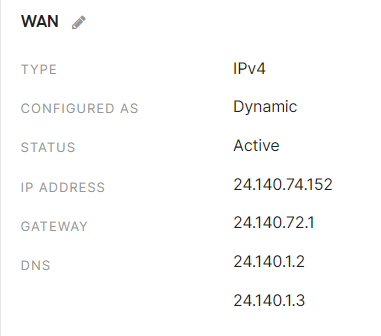 If this isn't enough information to help me, we can end it here. I will just keep trying on my own until something happens.

sure, the port your IP phone is connected to is configured for the correct VLAN (9)? Is it connected to the Teleworker Gateway or a switch? If it's connected to a switch, is the switch manageable?

You don't need a group policy for this (in fact, they won't work for this).  Instead, configure the Meraki MS phone VLAN option.