Had multiple stacks of 5+ switches fail to upgrade when rolling out 15.14. Was able to restore functionality by breaking the stacks and upgrading each switch individually, per SE’s recommendation, which took hours considering each switch took 20/30 minutes to boot, download and install the firmware and boot again.

This wasn’t the first time we’d been burned by failed stack upgrades so we ended up implementing a 3 switch stack cap since we had the SFP modules, SFP+ units, fiber pairs and a Distribution switch with enough free SFP+ ports. This means we now have two independent stacks of 3 switches in some IDFs and it cleared up the constant Meraki Dashboard drops on the previously 5 or 6 unit stacks…but I’m still seeing single MS390s drop off for no obvious reason and during times when essentially nobody is using the network as shown on the following image:

Waiting for our Technical Solutions Architect to find more information on 15.14.1 to decide if it’s needed or suggested.

I don't like building stacks bigger than 4 either.  5 absolute tops.

Makes sense. Our largest deployments were 6/5 units so 3 just happened to work for us.

Our Meraki Dashboard seems healthier after splitting our MS390 stacks: 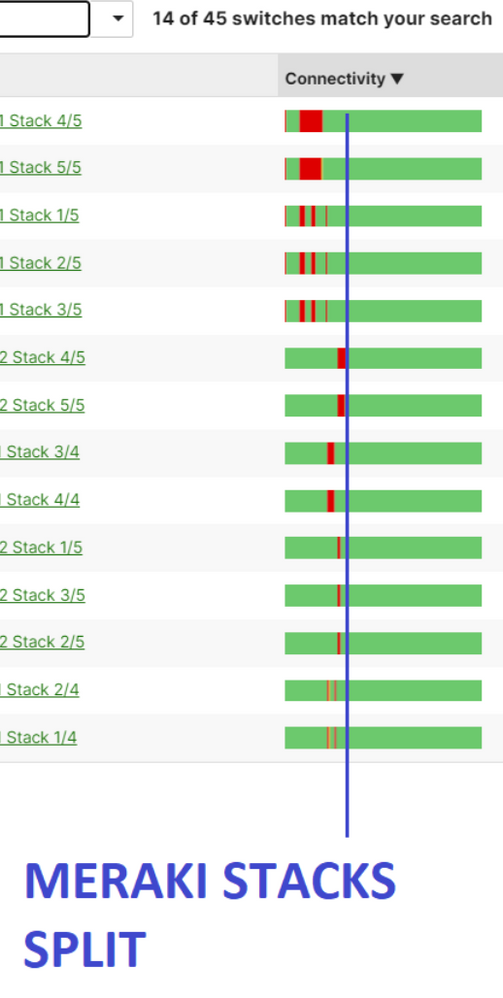 Got an answer regarding upgrading to 15.14.1 from 15.14 as it relates to the fix for flash corruption:

The MS390 stack corrupting its firmware happens specifically when upgrading TO 15.14 or when a reboot occurs on a switch stack of 8 (<1% of the time).

It is advised that with smaller switch stacks it's more applicable to stay on 15.14 unless you’ve run into a specific issue that needs the new maintenance release.