We have a super weird topology like this one : 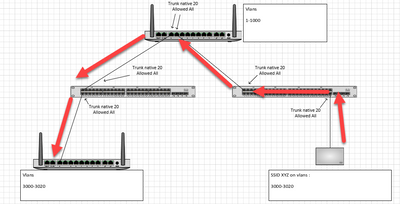 The MX on the top does Routing and the MS are simply Layer 2 switches.  The MX on the bottom is strickly for the guest network.

Let's say we have a SSID on vlan 3020. The vlan is tagged on the SSID and clients are bridged. Client on the AP sends a DHCP discover. Will the MX on the bottom left receive it ?  ( the flow would follow the red arrows )

The question may sound stupid , but sometimes the MX product line is tricky and is not really behaving like a standard switch.

Is 3020 allowed on all the MS trunk ports and the top MX LAN ports? That's the only way it would work in bridged mode to VLAN 3020.

With Meraki devices all VLANs exist by default, you don't need to create them in the way you would on a Cisco IOS device.

the-iot
Here to help
in order to be able to change the native vlan on the mx, the vlan interface must be created on the mx.
with "all" vlan id 1-4095 are forwarded. but only as a trunk on the mx.
0 Kudos
Reply
Subscribe
In response to the-iot

Both captures were taken the interfaces on the MS leading to the MX.

When the vlan is not present on the MX , the MX doesn't forward the trafic to SW2

I was able to confirm that a MX will not  forward trafic if the vlan is not present on the MX.

Here are my tests :