This big one: Resolved an issue that resulted in MX84 and MX100 appliances having significantly reduced VPN throughput.

Hoping this resolves what I believe to be a rebooting issue with some of our MX67C firewalls running 17.6 and 17.7.

I wish I could give you details.  Meraki has yet to identify the issue.  We have a simple setup, with one Meraki peer, and two non-Meraki VPN peers.  Issues are with the non-Meraki peers.  One is a cloud backup solution that chokes when on 16.x, and 17.8.  Revert back to 15.x and the performance returns.

That makes sense; we only have Meraki peers, hence having a different experience.

As most of the Meraki devices are running on this version, this is showing as stable version.

Every time updated firmware versions are notified to Meraki organization from backend, we can check the release notes and decides if we want to have that improvement or not. If we don't want it, we can certainly reject it and we will be never prompted for that firmware upgrade. When next firmware release is done, we may or may not get the prompt for firmware upgrade and we can cancel it if required. 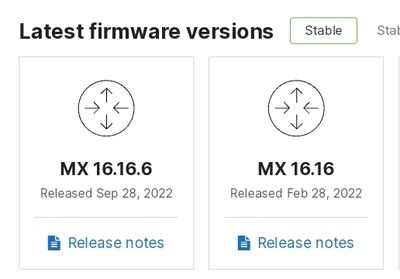 Ya... Its showing three versions for me.

@Pavithran If you upgraded to MX16 then the 15.44.3 would disappear, it only remains as you have some MXs on MX15.

Did they fix the issue where the firewalls forward traffic on their LAN ports before configuration is applied when the MX reboots? Have only been waiting 4 years for that one to be fixed, oh well. Can't rush these things 🙄