Need some help on accessing the subnets on the Non-Meraki S2S VPN peer.

I already have up and running an IPsec tunnel between HQ and Branch(ASA to ASA), now the idea is to update our Branch ASA5510 to MX84.

Just tested a VPN between MX84 and the HQ ASA and connects normally as I'm able to check over the " All Non-Meraki/Client VPN" event log.

My work on replacing the ASA to MX was to mirror the conf in ASA to MX, advertising the subnets the way they were on ASA.

The problem is that I'm not able to ping the HQ subnets from the MX.

The only thing that I see suspicious is that in ASA I see several route as:

What is the issue?

Any help is appreciated

You wont need ot add a static route on the MX side.

I would start at the ASA at HQ and see what it is reporting.

I just discovered that I can ping all subnets but one, I have 6 subnets advertised on VPN and just this one does not ping.

I'm current at Branch and I don't have access to the HQ ASA, so I'll ask them just in last resort. 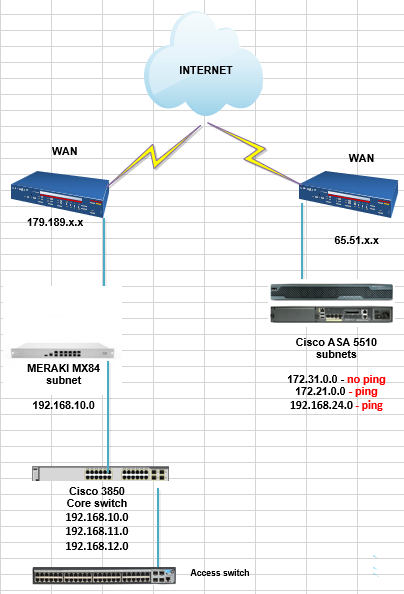 With ASA in place, when I traceroute from a client below ASA I get these hops to the subnet that I'm unable to ping when Meraki is placed:

Maybe it is something that I'm missing?

Overlapping subnets, with ASA in place I have no problem on working with these subnets.

I need to have access to all of them over the VPN, how can I manage to fix that?

If you advertise the more specifix prefixes it should work.

For now I'll choose my guessing as solution because it'll take some till I can test this routes in HQ ASA.

For those searching for solution to the same problem, have in mind that this case just worked because the overlapping subnet 10.24.0.0 was not in use on both sites, but just in one side.

If you have same networks on both sites, a Non-Meraki VPN won't work in this case(at least this way) because it does not have the VPN translation active.

VPN translation, which is the feature that solves the problem of same subnets on both sites, only works with AutoVPN which is Meraki-to-Meraki VPNs.