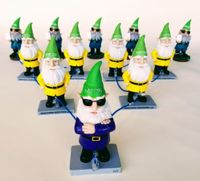 Gnome Network Topology2017 was my first holiday season at Meraki, right before our annual shutdown, and we were in need of a holiday community blog post. I thought up the idea of creating a Gnome Network Topology Diagram.  It was a fun project, but I knew the next year needed to be something a little grander.

The idea came to me in September of 2018, on the elevator, thinking about how snowflake crystals form when one of those imaginary snowflakes fell from a green cloud and landed on a Switchmas tree.  Hmmm, I thought, has anyone built a such a thing. A glorious facsimile of a holiday tree in network switch form? I sprang to my computer to see if anyone had been so spirited before. To my surprise, I found nothing.  There were trees of books, wireless access points, a few desktops, and laptops but no Switchmas tree. With this knowledge, I tucked my Switchmas vision under my mind’s idea blanket until the holidays were upon us and I could unleash it on the world.

Cut to December 10th.  My Switchmas vision was ready to awaken and become reality.  I knew there were going to be some technical challenges and, from my research, I knew I was breaking new ground. We’d need to do some planning and experimentation to make this work. First, I decided to plan out how we could stack our switches to create a tree shape as well as maintain stability.  After all, this quantity of switches was going to be quite heavy. At first, I thought octagons to heptagon to hexagon and on and on to the top. 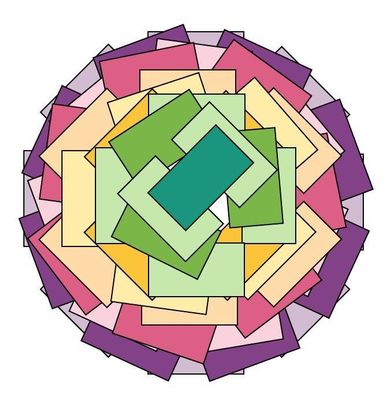 So we went and tested it out without really doing the math.  And this is the squat little Switchmas bush that was the result. 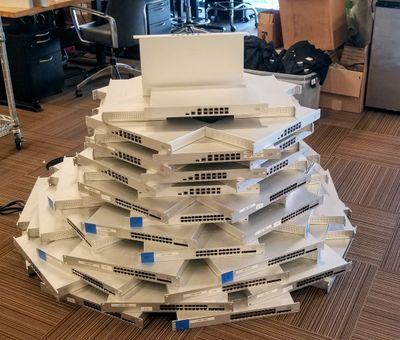 We quickly realized that we didn’t have enough switches. During our design discussions, we had also decided that this would best be made into a Fullstackmas tree but, even then, each level is only 1.72 inches (4.38cm) high.  So, to create a 5ft /1.5m high tree, it would require 34 levels worth of switches. Starting with octagons, that would require about 173 devices. Since we are swapping out some lab equipment we had about 100 MX’s and MS’s to work with so that architecture would not work.  The first attempt was not a waste though, as it proved the configuration was stable and did not require any internal support. Our plan to power the switches from the inside with multiple power strips was a success. I could see a Merry Switchmas in our future with just a few more tweaks.

We broke it down and rebuilt starting with hexagons to get more height with the equipment we had available. At the end of build two, we had more height but not nearly enough and the tree was crooked at the top. 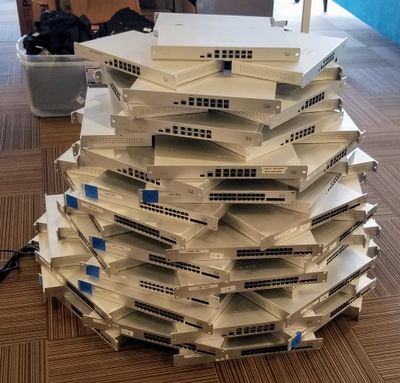 Again, we learned more and I also realized I would need to order a tree’s worth of green Christmas lights as well to add some additional Meraki holiday flare to our growing Switchmas tree.  The dream was becoming a reality, but I could really only justify the resources for one more rebuild since the man-hour count was climbing for this passion project. The third and final build would need to be the one. 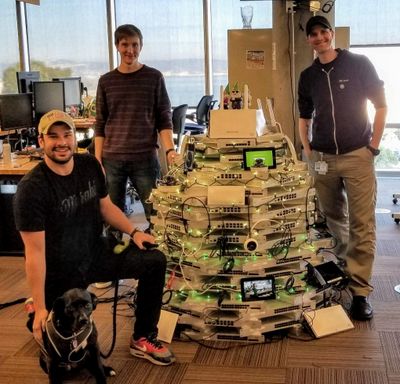 We only reached about 4 ½ feet in height, but we got everything powered on, and the entire Meraki stack is represented (Even a nod to our bygone MC phone).  The software-only products are represented by iPad graphics. The green Christmas lights really tied the whole production together. Plus, with about 40 open browser windows we were able to make all the switch ports blink.

So, a lot goes into building a Fullstackmas tree. I added it all up, and here are the results:

Soooo yeah, that's a bit pricey for a holiday tree, but it’s so easy to manage.  I mean, in just a couple of clicks you can see the entire topology: 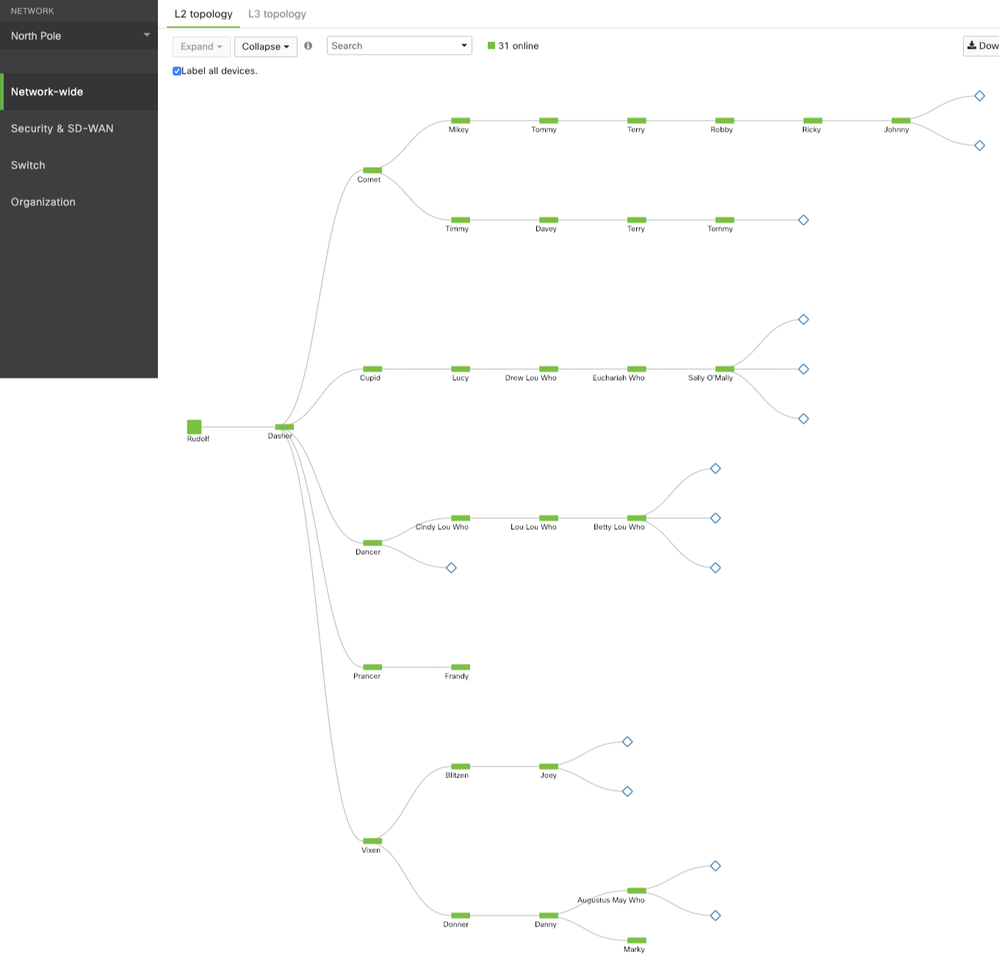 The next question of course is: where do we go from here?  Well, next year I’m hoping to go up to 8Ft/2.5m Switchmas tree and get even more Meraki products represented.  But for now, I want to thank Adam B., CJ, and everyone else who helped make my dream of building a Switchmas / Fullstackmas tree possible.  I would also like to wish everyone far and wide a very happy holidays from our Meraki family to yours. 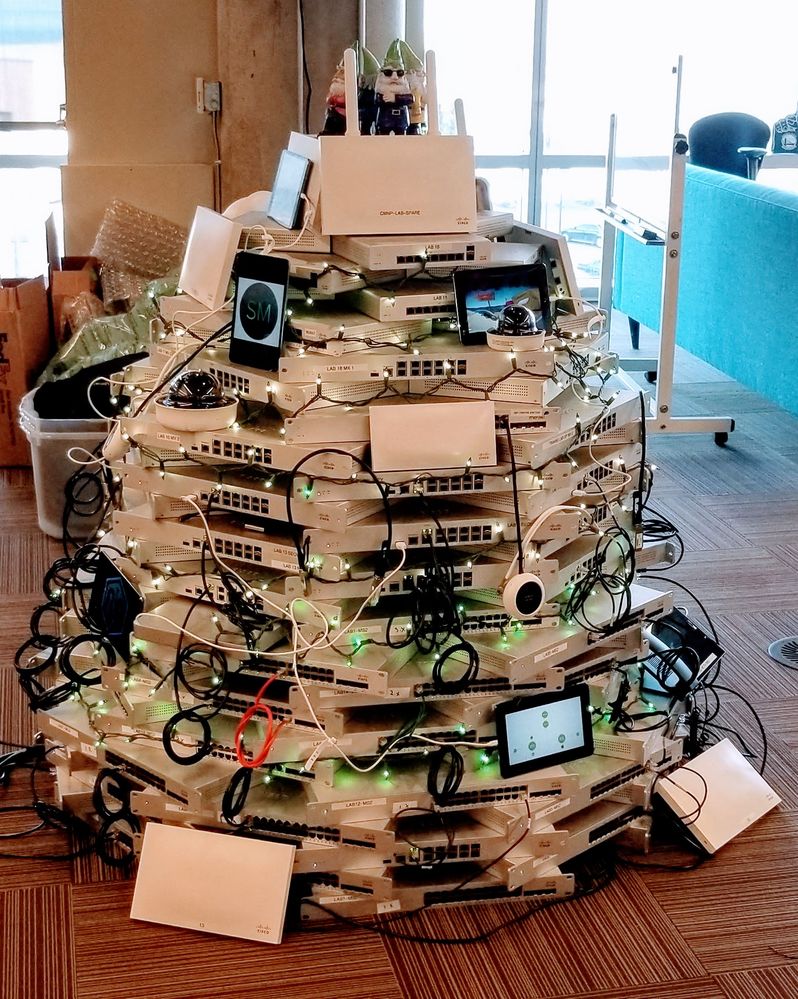 Truly is a Switchmas miracle! We always knew you were a visionary Adam S.

PeterJames
Head in the Cloud

Need to wear a hat indoors? I live in the wrong country!

Or are they tin foil hats...

(Once you are finished with the equipment, I may have a home address for you 😄 )

First off, that looks awesome! I do wonder what kind of nightmare the power cords look like and I also wonder how much power the whole 'tree' uses? Nicely done folks, Merry Christmas!

AdamS
Meraki Employee
The inside of the Switchmas tree is the power chord equivalent of a tangled string of Christmas lights. I'll calculate the total power draw of the Switchmas tree today and post it as well.
Adam Slater
Content Engineering Manager
Training & Evangelism Team
1 Kudo
Reply
Subscribe
In response to AdamS

Ok, so we have a mix of MS switches so I used a rough calc between the MS switches we have online and the MXs we have online.  We didn't power devices in the back of the tree to save on power and cabling.  So the estimated power usage of the Switchmas tree is below. The max Watts is just there for fun really and potentially it gets up there when I power on the tree in the morning.

AdamS
Meraki Employee
Well, Switchmas has passed and the new year is upon us. I broke down the Switchmas tree today and I realized I hadn't as my back was hurting that I had not calculated its total weight. So I did and with all MS, MX, MR, MV, iPads, Ethernet cables, Power cables and all my estimate puts it at about 850 Lbs or 385.55 Kg. I hefty tree for sure. I hope to double that next year. Merry Switchmas to all and to all a very happy 2019.
Adam Slater
Content Engineering Manager
Training & Evangelism Team
3 Kudos
Reply
Subscribe

I love it! I love how you actually have them online. II reckon you have remote blinking mode from dashboard on?

Coincidentally, yesterday I saw a similar picture of another Christmas spanning tree. 😄

AdamS
Meraki Employee
That's awesome, I didn't find any in my search in October, is that picture from this year? Send a link so the brotherhood of switchmas may be born!
Adam Slater
Content Engineering Manager
Training & Evangelism Team
1 Kudo
Reply
Subscribe
In response to AdamS

@AdamS wrote:
That's awesome, I didn't find any in my search in October, is that picture from this year? Send a link so the brotherhood of switchmas may be born!

In any case it probably is from this year. Seems to be about 4 days old.

wow the Switchmas tree is the most expensive of the world