Meraki and SkyQ AND Minibox

Meraki and SkyQ AND Minibox

Has anyone here successfully gotten Skyq working on a meraki AP? I've given up and just setup an old unifi ap, and it works perfectly.

In my head this is going to related to the sky boxes meshing and repeating, so they are being blocked

NolanHerring
Kind of a big deal
Not sure what that is but quick Google on my side shows it just being an end-user device that needs Internet.

Is it connecting via Wi-Fi I assume?

Does your SSID have dual-band? Does the device support 5GHz etc.
What model AP, what firmware version are your APs running?
What do you have your minimum data rate set to on the Access-Control page?
Nolan Herring | nolanwifi.com

SKY is a home TV Service, based on Satellite (??) Dishes. Their latest iteration is Sky Q, and they also provide broadband services. What they have tried to do with SkyQ is integrate a lot of technoogies into one box. Obviously its the set top box, it also has some apps on it (Netflix, Disney+ etc) but where the previous version depended on coax cables from the satellite dish, this one only has the signal being delivered to one main box. The other boxes then run of wireless from this.

Sky is the UK/Ireland version of Fox

So back to the box. In addition to being a set top box they made it integrate with their router, and provide a kind of mesh / repeater.

I have an MR33 and to be honest, im having plenty of wifi issues on it right now.

I could see from the Meraki dashboard that the SkyQ Boxes seemed to create some kind of virtual device with the MAC 38:a6:ce:29:6a:7e.

There is a lot of items in this, im just wondering if anyone has it working on their Meraki. This question is likely only going to be answerred by UK/ireland people
0 Kudos
Reply
Subscribe
In response to JimmyPhelan

It is not their policy to play nice with anybody else.

They remain totally indifferent to the need to integrate into an existing network.

They have an uncanny ability to identify and employ the installers from hell.

You think I am being harsh? Look at other manufacturers' forums and see the posts from users about difficulties integrating Sky devices into existing networks. Sky is not alone in this.

If you are doing anything vaguely sophisticated involving multicast IPTV, stick another brand security appliance ahead of the MX and route that traffic directly to the playout devices. As well as being reliable, it is more secure.

Oh all of the above is well known to me.

So the long and short of it is if you have anything beyond a simple AP, forget about SkyQ! 🙂

I have Sky Q integrated into a full stack Meraki setup. I have 1 main box and 2 mini boxes.

Unfortunately you will not get this to work over WiFi if you have a mini box. I was able to successfully set the boxes to turn off their broadcast SSID and connect to my MR52s. The problem (as I understand it), is that the traffic from the main box to the mini boxes is still transmitted over its own mesh and not over the WiFi connected to the APs. Very frustrating when I have such a robust WiFi set up.

I had to set everything wired, and it does work flawlessly. I have a number of switches between the boxes and the MX. In order to get the iPads etc to stream, I had to set the following on the switches:

Unfortunately, for many networks, IGMP Snooping is required. Having to turn it off to make the Sky boxes function is a perfect illustration of not playing nice, as I mentioned above.

JimmyPhelan
Getting noticed
Yeah, they dont play will with others, but when you are a service provider and this is your service i suppose i can understand pushing the solution that i know will work for me, and not really caring about others
0 Kudos
Reply
Subscribe
In response to AnythingHosted

JimmyPhelan
Getting noticed
AHA! Yeah, Wired connection is what i am expecting to be honest, and that is "grand". And with Social Distancing meaning im working from home, i might get a chance to run some ethernet...
0 Kudos
Reply
Subscribe
In response to JimmyPhelan

Im having this exact issue now with our SkyQ mini box keep dropping its connection every few minutes each night.  hasnt happened before this week though and had SkyQ for about 2 months now.

I know when it was installed i had to whitelist the main box as it was running dhcp so got blocked, i have since spotted the Air Marshal component of the MR33 AP has contained the sky private mesh which is how these boxes talk.

I have whitelisted the SSID used and also tried marking the SSID & BSSID as uncontained so no security policy will apply to them but still cant get the system to allow the boxes to talk.

Does anyone have any ideas where i can go to fix this before i get chance to run cable through the house?

As the move to smart devices has gathered pace, there have been a surprising number of unintended consequences, some of which are not so unexpected when the commercial origins of many of the "smart" device vendors is considered.

One these unintended but not unexpected consequences results from the reasonable attempts by electronic goods vendors to improve energy efficiency whilst maintaining usability. So TVs and audio systems often enter a "sleep" period during the night. It is more complex that it might appear at first sight, there is sleep, light sleep, deep sleep and then, ultimately, turn the power off. To add to the complication, many devices also have some form of Wake-on-LAN capability, or send a packet indicating that they are available.

Currently, some Chromecast capable audio devices from Sony appear to go up and down several times each night, as far as error reporting is concerned. Meraki doesn't feel a need to do anything about this, nor does Sony.

Sky devices show similar behavioural characteristics, and some switches don't handle it very well. Problems disappear when the sleep function is reconfigured. In extremis, turn off the Sky kit.

Network manufacturers need to get together with the smart device vendors and explain how to play nice, and, incidentally, stop cheaping out on Wi-Fi components.

Hi All, i has the exact same issue with my MR 33, i created a new SSID calling it (SKYwifi) created it really simple no levels of extra security enabling both radio frequencies all that jazz.

I got them working and talking to each other however each morning id come down to find both boxes had disconnected from the network and the sky mini box not working. After a few days of getting fed up reseting the internet details and running between rooms. I decided to run a few cables. However i have now seen something interesting on the reporting and now i have a new annoyance !

Each morning i wake up to 4/5 emails telling my both ports on the internet went down and came back up.

Anyone know how to remove notification for an individual switch port? not looked that hard yet but couldnt see anything that stood out. 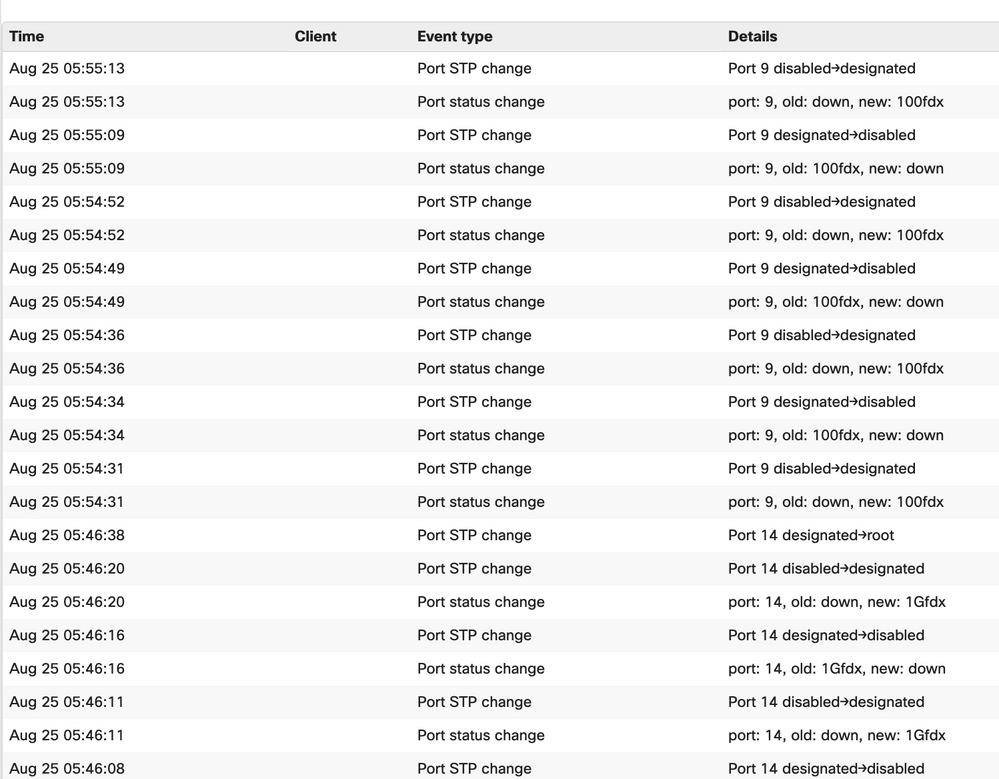 I frequently have issues with UPnP and the way the problematic hardware sleeps. So it might sleep, or deep sleep or be hard off, aka the Micky Flanagan effect. These are adjusted in the standby settings.

With any luck, if you configure one of out, out out, or, out out out then one of these options will reduce the number of messages.

Practically, I deal with this by saving all the alerts in a directory which is self-clearing after 30 days.

You should be able to tag the ports and then choose the tag to get an alert for.

So tag all the ports except port 9 as "port notify" and then on the alerts pages choose this (I've tagged certain ports for cameras):