Cannot disable DHCP on my Switch?

Cannot disable DHCP on my Switch?

I have a very strange problem with my one of my MS120-24P switch. It's giving away DHCP leases and I can't find a way to stop it. There is no DHCP configured on the switch but it's handing out DHCP leases from the 10.0.0.0/8 range.

Here is a screenshot from Switch > Configure > Routing & DHCP settings. There is no DHCP configured: 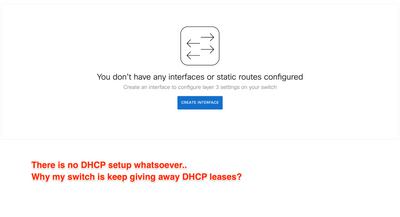 My network setup is very simple. I've got;

Resetting the switch back to factory settings didn't solve the problem. I re-configured the 2nd switch many times but didn't go anywhere. Switch config is up-to-date firmware is latest

It's so sad that I dumped a lot of money into this gear and it's behaving unusual and support can't help.

I've been managing different Meraki environments for over 5 years and have never seen anything like this. Both Meraki support and Meraki devices let me down. I am very sad...

@alican agree it is odd as the MS120 range doesn't support being a DHCP server...  A few things I'd try that you probably already have tried:

If the switch is plugged in elsewhere, say at home, does a client connected to it get an IP?

Is the switch reaching the internet/cloud and if so what IP does it show for public IP?  It seems to me to be in setup mode, or something similar.

That's what I would try first, booting it isolated to see if it's handing out IPs with no up/downlonks.

Can you block that mac address  so that it cant give out dhcp.?