Would it be possible to increase the number of cameras allowed on a Video Wall?

Right now the limit is 12. As I understood from a support agent, this is due to a limitation in the browser, if I am in Chrome viewing more than 12 consecutive camera streams it will crash. If that is the case, why can't we have a dedicated app or program for viewing cameras like on a traditional DVR System? It seems to me like this would be the simplest solution, especially on a local network where you aren't attempting to stream the feed via the internet.

I have 18 cameras currently online, with another 14 awaiting deployment. I have 32-inch screens set up throughout the property with an HDMI signal clone device powering them all from a single station. Previously, this was for viewing the output of our DVR and we had 28 cameras on a single video wall, and our security personnel was able to view from all over.  Now I am limited to 12 with the Meraki Video Wall.

Anyone have a workaround?

What happens if you use two instances of Chrome set to use half the screen each?

What about just putting in an extra computer and splitting it between them?

I'm not sure if it's a browser limitation, that could have something to do with it, but it's also a function of the hardware where you're viewing the video.  I've seen up to 3 browser tabs open in Chrome showing 3 different video walls with 12 cameras each, so it was simultaneously streaming 36 MV camera feeds.  This was on a higher-end Macbook laptop and ran smoothly.

I understand your ask and thanks for sharing your use case.  Note that Meraki Community is not the formal mechanism for making feature requests, but I've noted it and will bring it up with the team, and please also make this known to your local Meraki reps or Meraki Partner reps so they can add that input and the MV team can review and prioritize it.

For the time being, would a tab rotation tool (I use one called Revolver in Chrome) work for the time being to automatically rotate through the open browser tabs?  Or as @PhilipDAth pointed out, maybe have 2 instances of Chrome running side by side with a minimal skin and sized appropriately?

The video wall has a 12 camera limit to protect users from inadvertently creating network congestion, and to ensure browser stability on almost all computing platforms. Each video tile in a video wall is a 720p resolution video stream at the configured bit rate. At the 'Enhanced Quality' setting this will equate to a 12 tile video wall using 9180kbps.

Playback speed increases will increase the bandwidth required per camera by the playback speed multiplier. For example a camera at ‘Enhanced Quality’ settings will go from 765kbps to 1530kbps at 2x. Importantly this also includes the video wall bandwidth usage and could lead to a bandwidth requirement of up to 18460kbps for a video wall of 12 cameras at 2x or 27540kbps at 3x.

This type of bandwidth consumption is inconsequential on the LAN but due to the seamless cloud proxy, a remote user could suddenly saturate most uplink speeds at small locations. The 12 camera limit tries to put some upper bounds on the potential bandwidth consumption under normal circumstances.

As has been stated in this post, our recommend way of simultaneously displaying more than one video wall is to use independent browser tabs or windows. This has the added advantage of allowing video walls to be pinned to monitors and increasing stability as it distributes video decode over numerous threads and processes.

In our testing we have run 50+ concurrent streams on an 8 monitor setup using a 4 core current generation Xeon processor with 16GB of RAM and a dedicated NVDIA GPU. Ultimately browser stability at such loads can become an issue, but <30 streams should be achievable on most systems.

Here is an example of one of our testing rigs for multi monitor video streaming. What is cool about having different video walls per browser tab per monitor is you can mix type. What this means is some of the streams can be local, some cloud proxy, some live, some historical. In the picture below the single camera stream is actually a zoomed in video wall, just moving your mouse to the screen and clicking will zoom it back out to the tiled view. 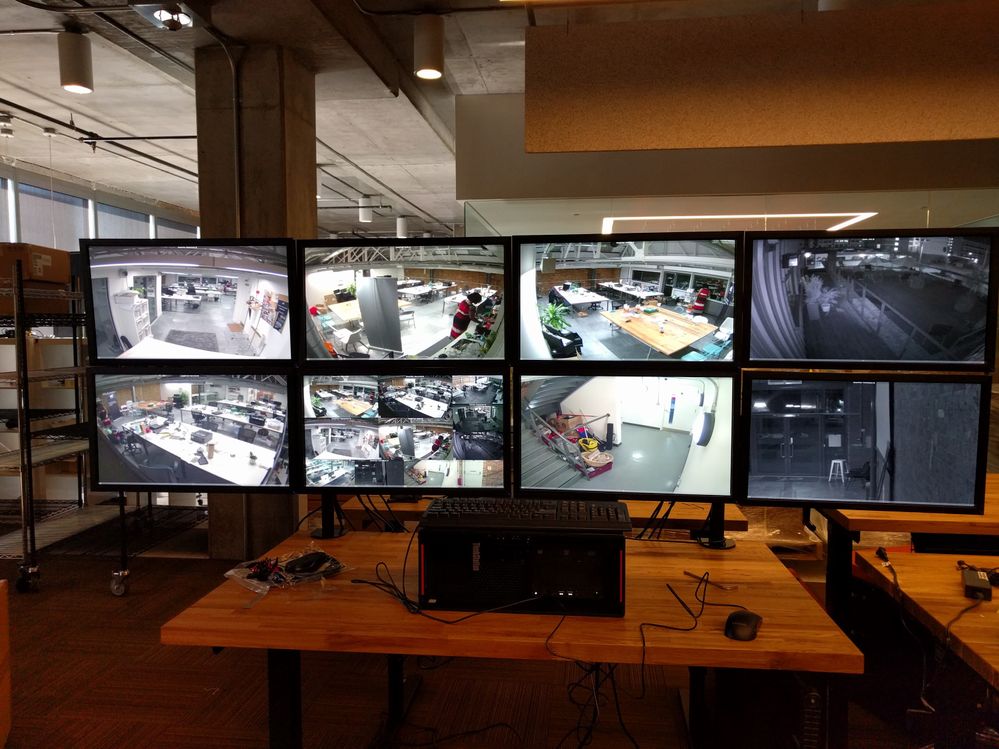