What exactly do the default QoS rules do on MX

What exactly do the default QoS rules do on MX

On the MX (not the MR) you can enable default traffic shaping rules.  I can find no documentation what these rules actually do.

For example, does class get placed into the high/medium/low queue, and if so, which queue is each placed into? 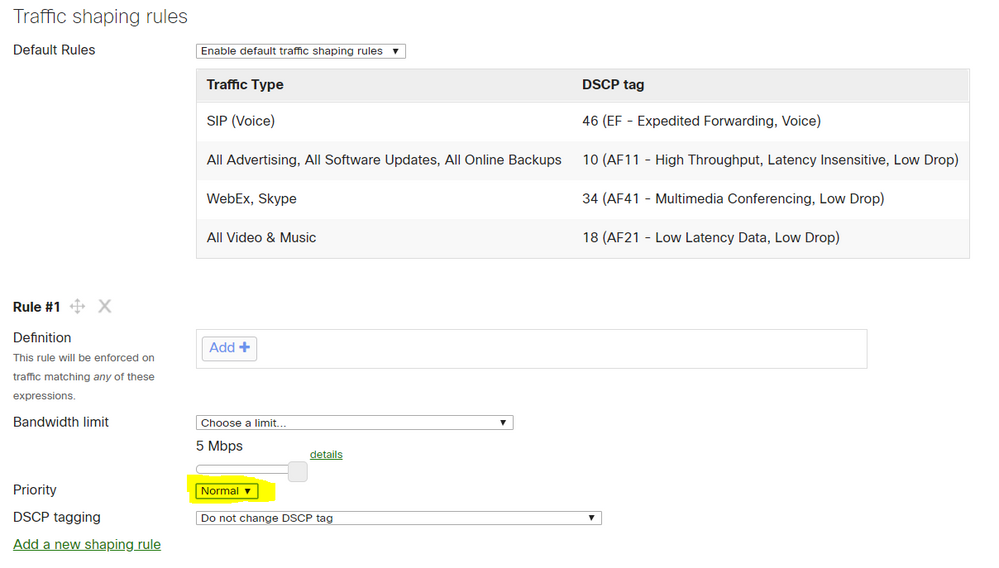 you do know what they do on mr?

i assumed it only marks the traffic. except for dscp 46 that gets highest prio over all other traffic at mx.

So you think it is saying if it is SIP it is remakring the traffic to 46/EF?

i think its marking rtp (maybe even sip).. but the name is confusing and sip should not be marked 46

Good question and I am sure something that can be very easily added into the documentation.

NolanHerring
Kind of a big deal
On the MX side I always understood it as it would re-mark anything that doesn't have the correct marking already, outbound. However QoS on the Internet doesn't exist, so the only real benefit to doing this would be for when the traffic goes over the VPN tunnel (if you have AutoVPN running).

The only thing that I know that does (or can?) affect the Internet destined traffic would be the specifically the 'priority' option as it would drop into a different 'bucket' for the MX to process in priority of high to low kind of thing.

To be fair though I've never really messed with the priority setting stuff, but I read up on it and if memory serves just concluded it wasn't worth the hassle, I think mostly because it also requires that you have the bandwidth configured for upload/download accurately (which as we all know DIA circuits are never 'exact' anyhow) on the traffic shaping settings for the MX, so that it can correctly allocate the right percent of 'known' bandwidth and adjust the buckets accordingly.

Even then I'm still sure I got it wrong, therefore the 'not worth the hassle' part for me just cropped back up again lol
Nolan Herring | nolanwifi.com

For the SIP thing according to the documentation you shouldn't even need to enable default traffic shaping rules.
All incoming DSCP EF PHB's are put in an unconfigurable real-time queue.  (I assume this is a strict priority queue) and the rest just gets the CBWFQ treatment.

For the rest it's just guessing at the moment.

This is an old post, but I still cannot find information in the documentation what exactly these default traffic rules do.

We can see that there are 4 rules, but for example about the WebEx traffic - what priority is set? I guess HIGH, but it is not written clearly. Have anybody found detailed information ?