I have a specific requirement where a static route is providing a route via a 2nd L3 device connected to a LAN port.

As such next hop testing will not detect if a L3 path failure occurs towards a destination using the static.

Will 'while a host responds' provide route availability and detection for a distant host that sits behind a few hops?

Specifically here I am using the static 0.0.0.0/0 via next hop on a LAN port so as to use a next hop L3 device to route to the Internet. However if that device looses internet connectivity I need the 0.0.0.0/0 static removing to allow a dynamic 0.0.0.0/0 via the MX WAN interface.

Does anyone think this scenario is possible?

I checked that the static route was active via the Fortinet Firewall 192.168.2.1 and it was.

This worked when the 8.8.8.8 host test was associated with the Default static. When I failed the WAN interface on the next hop firewall the route then disappeared.

Now for the interesting bit.

So we have a static default via a 3rd party firewall and have the ability to remove the route if the test ping to 8.8.8.8 fails.

My monitored pings to 8.34.34.34 and 88.221.170.233 both failed when the static default route disappears, however Internet connectivity is maintained by my test PC plugged into MX port 3 on a separate VLAN.

So the failover for Internet connectivity via the MX WAN port instead of the next hop worked 🙂 but the CMD pings stopped. I tired an additional CMD ping to a different destination 208.67.220.220 and that responded via the route MX WAN 1 however the original pings still showed Request Timed Out and again I still have internet connectivity.

I rebooted MX to see if pings would return and they did.

So  were 99% there but I am a little confused what is happening re the original test pings failing. p.s If I re enable the WAN port on the Fortinet the Static route becomes active again and the pings return.

Strange. What do we think is going on here is it the arp cache on the MX that's not timing out within my observation window?

Below is a test I have just performed pinging the 3 destinations. The original two that failed and the new destination to OpenDNS. The picture below is what just happened after I disconnected the Fortigate WAN. Notice the OPenDNS ping remains but the only the original destinations which were established when the Static route was active fail. 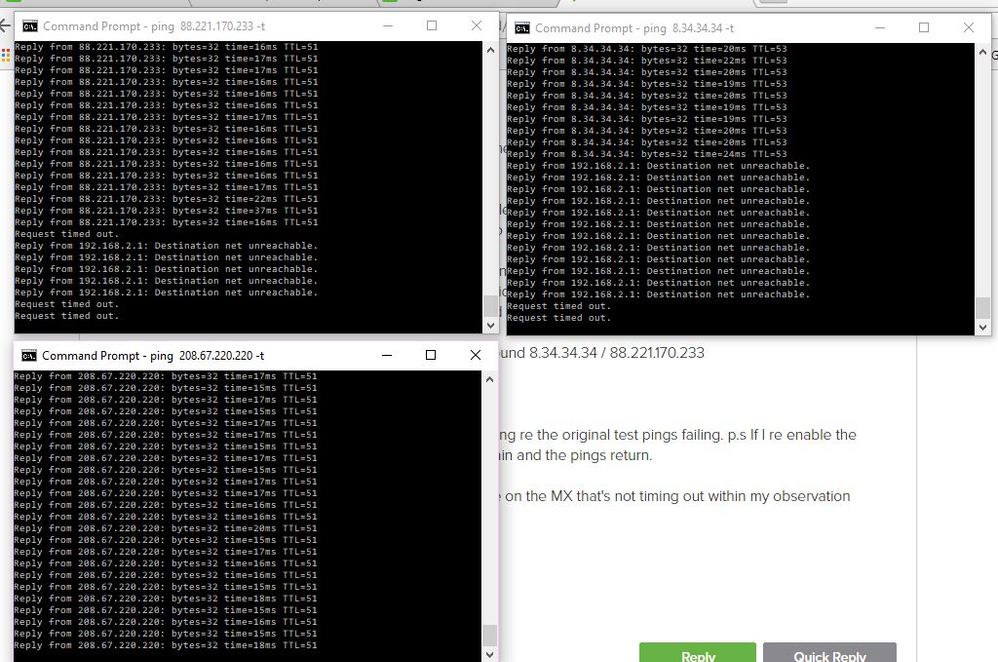 I'm guessing the MX, the test machine, and the default gateway to the Internet are in the same subnet.

If so then I'm guessing that the Fortinat is sending ICMP redirects.  If you can disable this then the problem will go away.

Another option is to put the default gateway to the Internet on a separate dedicated VLAN so that workstations are not in the same subnet.