We're suggesting an SDWan package for a potential cx, and their requirements doc includes a question I haven't come across before... nor can I find support for in the meraki docs.

Device failover based on VRRP is three missed heartbeats... 3 seconds.

But if WAN1 physically goes down (ie, the ISP CPE device dies, or I physically pull the cable)... is it instantaneous failover to WAN2?  I hope so.  Is that documented anywhere?

Yes, it does fail over immediately, though I'm not seeing that in any docs.

I will have to prove this for them in the POC... but a link in support would have helped in our response to their requirements. Funny that it hasn't been documented.

It definitely does fail over instantly, if you use load balancing it fails all new streams over pretty much instantly too.  Even on HA failover there is little if no downtime.

Hi @Mike_Robo_SK earlier answers are correct that in your scenario if WAN1/primary goes down the fail over is immediate and not based on VRRP heart beats.

Don't consider this official Meraki documentation, but I have documented some of this for some of my own customers.  Here's an image attached and the set of notes to go along with it.  I used a separate set of switches and MX appliance to simulate the "ISP" above the green line, and the "customer" site below the green line.  I will PM you the pcap file referenced in the notes. 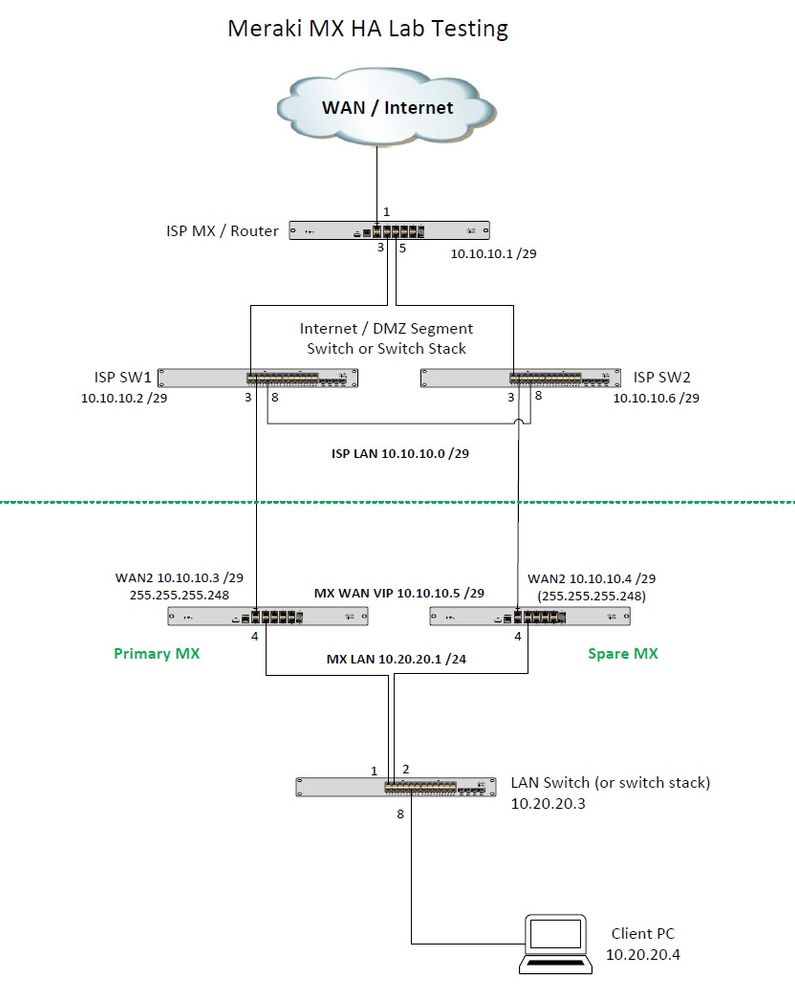 The HA failover is based on 3 missed VRRP heartbeats (3 seconds), and when the primary MX is back to normal the spare (now the master) will relinquish its master role back to the primary.

The diagram shows what I had in my home lab with the equipment I had available, which very closely approximates the actual deployment and was sufficient for testing the different failure scenarios. The tests are listed below.

On the diagram, the top half above the green line simulates the ISP/Internet connectivity, whatever that might be.  I used a Meraki MX connected to my home LAN behind my ISP cable modem, and created a /29 VLAN on the LAN side of the MX.  The switches I'm using for ISP SW1 and SW2 are just MS120 switches, not physically stackable, so I have them connected port 8 to port 8, so just think of that as a switch stack or your Catalyst core chassis.  Port 3 of each ISP switch connects down to WAN1 on the primary MX and spare MX.  Then LAN port 3 of each MX connects down to a LAN switch with a client PC on it.  I didn't have any extra switches on the LAN side, but that single physical LAN switch could be a switch stack as well and it would all work and behave the same.

Had the client PC running continuous pings to 8.8.8.8 while testing different failure scenarios as follows:

A: Power loss on spare MX: No impact, no effect.

H: Simulate soft failure where primary MX unable to get out. This was the tricky one. Configured rules on the ISP MX FW to purposely interrupt multiple Internet connection monitoring tests for the primary MX but not the spare. Blocked ports 53 and 80 and 443 and all ICMP traffic from the 10.10.10.3physical IP on WAN1 of primary MX. There was a failover from primary to spare MX and the spare MX became the master within about 2 minutes, but there was no 5 minute outage, only 5 seconds during the HA failover, the PC dropped a single ping. Sure enough, the connectivity status for the primary shows a period of time when it was alerting with "bad connectivity". Just blocking DNS wasn't enough to force this, all connection monitor tests had to fail including pings and HTTP GETs, not just DNS alone. I repeated this test a few times to be sure.

I had one of my customers on a Webex call and reproduced these tests while screen sharing so they could see it happening in Dashboard in real time.

It's regular VRRPv3 on the LAN side of the MX, so the 2 MX appliances in the HA pair will share a single Virtual IP address and Virtual MAC address and those are the ARP entries that the downstream devices will see. So whichever MX is the active primary, the VIP and VMAC will float to that physical MX and send 3 sets of gratuitous ARPs one second apart which will get interspersed with the VRRP advertisements (also 1 second apart) prompting the HA failover to spare (or failback to primary).

See the .pcap, I pulled the power on my primary MX and then ran this capture while it was rebooting, it came back online during this capture around the 50-second mark.

It was about 500 milliseconds later when the primary MX came back online, and immediately sent a gratuitous ARP for the VIP (frames 338 and 339). The very next VRRP advertisement (frame 340) shows a Priority field of 255 (primary MX now owns the VIP).

Additional Gratuitous ARPs were sent (frames 343/344 and 346/347) and were likely redundant, it does this 3 times, one second apart, to be purposely interleaved with at least two of the 1-second VRRP advertisements, and allowing for at least one dropped or corrupted frame, just in case. You can also see the primary MX ARP for the laptop PC (10.20.20.4) in frame 341, because it had just rebooted and needed that entry.

I'll PM you the .pcap

I suggest that @MerakiDave's post be copied directly over to doumentation.meraki.com