Came across a user who was unable to establish a vpn connection on his Dell laptop, running Win10. After entering his username and password, the user was stuck in a "connecting" state.

MX Appliances did update a few days ago, however all other users could connect to vpn without issue.

DH 19&20 Most commonly for me, when a client didn't have Client VPN configured to properly authenticate with AD etc - Since it only affected one user, this is not the issue

Confirmed that adapter settings were correct

Uninstalled/Reinstalled all Miniports including registry entries

This article allowed me to connect the user. Win10 issue FTW.

Just figured I'd post to save you all the time.

If it is a Dell machine also means sure you remove SmartByte.

Thanks Philip, it was not installed on user's laptop.

Same thing happens on our set of Dell laptops too with Windows 10 Pro.

It does not connect even from the VPN page.

Any suggestions? Or work arounds?

All the steps in the troubleshooting page were performed, but no luck.

NolanHerring
Kind of a big deal
If you perform a Windows 10 update, it ruins the preconfigured VPN settings. Microsoft resets the authentication setting to MS-CHAPv2 instead of PAP after an update is done. Awesome isn't it?

This is a brand new Dell latitude 3490 laptop.

No updates were done.

Assuming this is a one PC error and you know the PSK/all settings are right: I have had luck before with uninstalling the WAN Miniport L2TP device under Device Manager, then have DM scan for new hardware. Sometimes I'm lazy and just reboot instead, because I have bad habits.

If you don't see the WAN Miniports, click View and select Show Hidden Devices. Make sure you don't uninstall the drivers themselves,

@Bonifas What errors are you getting in Meraki? You confirmed that the adapter settings are reflecting the correct security configuration?

The adapter settings keeps reverting back to MS CHAP V2 though PAP is selected.

@Bonifas Is the end user saving their credential? This can also cause Win10 to change the password protocol away from PAP. Since my help desk has told end users to no longer save credentials, but to enter it every time, it's reduced the incidence of this behavior.

Assuming an AD environment where all client VPN users have an AD account... It's easier on the end user if you can integrate the VPN with their AD account, either via RADIUS or the straight up AD integration. We typically use RADIUS, since not all customers are willing to get a valid certificate for their AD server.

My Home VPN was working before using Windows 10 Laptop and Desktop.  Then after the updates it stopped working.  Modified the VPN Properties and allowed the protocols below and it started working again. 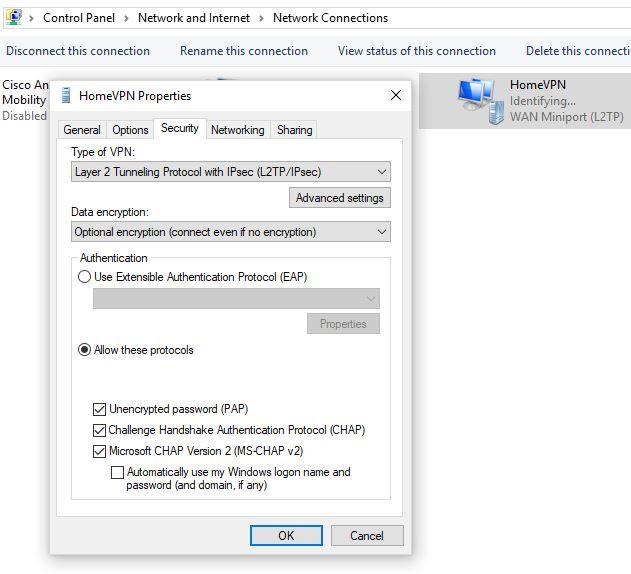 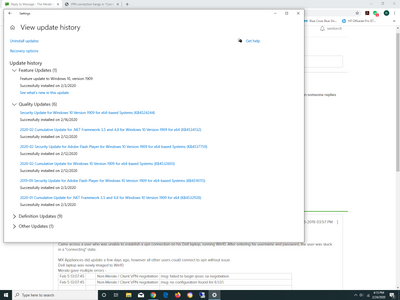 I can no longer login to this vpn on my W-10 PC.  I tried recreating the vpn 5 times with the same error message after a long negotiating attempt.  The same login information works on my W-7 laptop without fail. 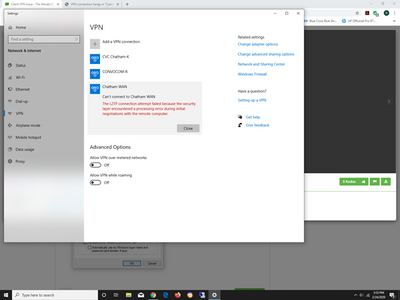 I had changed no settings on the W-10 Pro 64b machine when the error began appearing.  I looked through all the 'fixes' listed in this discussion and cannot find a fix.  I've thought of trying to restore my Pc to a date earlier in Feb but have some other valuable data I don't want to lose.  HELP!!