I have an MX in each of my 3 offices;

I have been using AutoVPN for over a year with a constant up/down VPN between HK and Shanghai. Unsurprising. The Shanghai MX is NOT connected to the special Chinese dashboard.

I am testing alternatives to replace the AutoVPN for the HK <> Shanghai leg. My current test is using separate wireguard appliances in HK & Shanghai, and a 3rd appliance in the Alibaba cloud, all connected to their own VPN. This works fine, and is stable. See diagram. 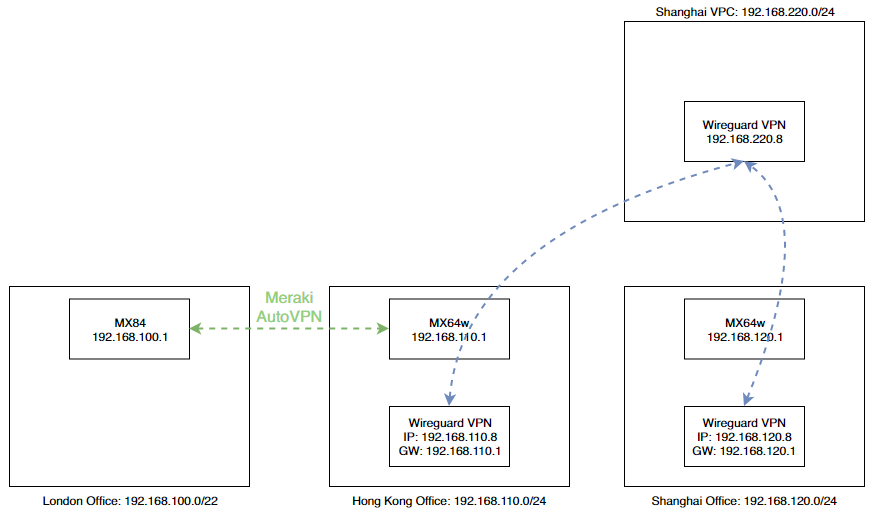 One option is not use AutoVPN at all, and have London also connect to the VPC in Shanghai, but latency to HK office would worse by around 80ms.

Is the London subnet in the encryption domain for the Shanghai Wireguard VPN? And do the wireguard devices have routes back to London?

It sounds like you have the MXs set up right, but you don't mention anything about what you have set up on the wireguards.

And do the wireguard devices have routes back to London?

I just checked. In Shanghai, when I run "netstat -rn" on the wireguard appliance, I get

So, no, Shanghai knows nothing about the London subnet. I'll try and create a static route, but can you advise what the command would be?

Is the London subnet in the encryption domain for the Shanghai Wireguard VPN?

Again, can you advise how I can check this?

Ok, perhaps a better screenshot of the static routes on Shanghai is this

I'm sorry @Miyo360 , I have no experience with VeeamPN so I'm not going to be able to help you with the configuration of that product. But, based on what you're showing me I suspect that the problem lies in the return path from Shanghai back to London. 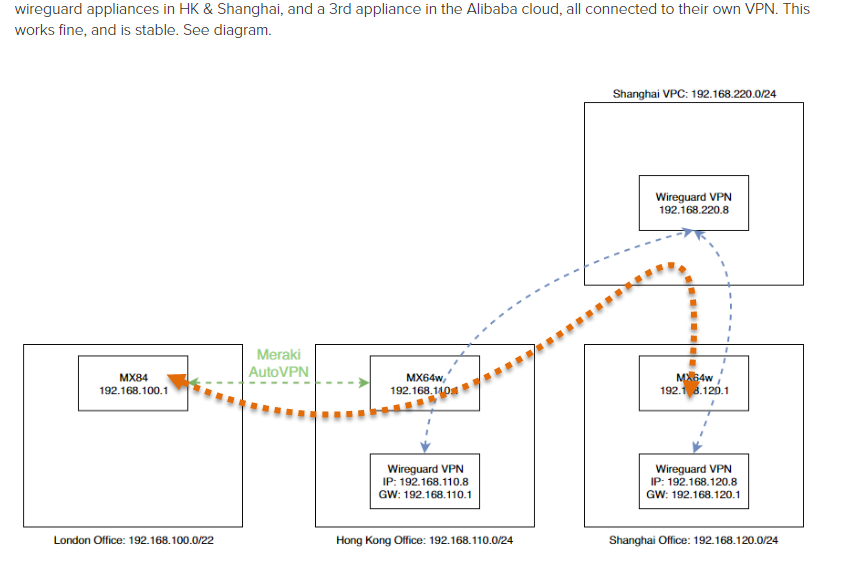 I could if I knew how! From the look of it, the VeeamPN appliance doesn't store the wireguard interface config in the usual location, typically /etc/wireguard/wg0.conf I have searched all over for "wg0.conf" and "wg.veeampn" but can't find the file. I don't think Veeam offer any support for this product, so I may have to look at another solution.

Ouch. If it's business critical, let us be your cheer squad and encourage you to get a solution with support.

Yeah, unfortunate. I'll put something on the veeam forums and see what I get back.

2) You need a static route on HongKong Meraki toward WireguardVPN

3) For return  traffic, you need a static route on Wireguard VPN