Whilst packaging files and script (and even plists) is relatively trivial on the Mac (you can even do it from the command line with pkgbuild), things aren't as easy for Windows

Because of this, I've put together a guide on how to package scripts, files, .exe and .bat files, and even run one of the files after install, so that you can completely provision your windows devices:

There’s many ways to create an installer for windows that performs functions above and beyond what a ready packaged installer will do. For example, reading and setting registry entries, placing files in various places, running batch files, etc. Whilst there’s plenty of commercial applications to do this, I’ve used a app called NSIS to show what can be achieved

AcmeInstaller.exe : the name of the file you’re going to create with the app

$Desktop is a variable which will have the correct path for the currently logged in user, to the Desktop

$Desktop\AcmeFiles : A folder on the users Desktop where we will install the files

$INSTDIR The above folder, $Desktop\AcmeFiles

$DESKTOP\AcmeFiles\runme.bat : The bat file that we will run as part of the installer process. This could be an msi, exe, bat or even cmd. Having a bat file means that you can have complex logic being used

I've used the Desktop as it's a useful place (and easy) to spot that the files are being installed and executed correctly: For production, I'd use somewhere that's available whether the user is logged in or not: /tmp for transitory files, Program Files, or somewhere more convenient for you

You should now have: 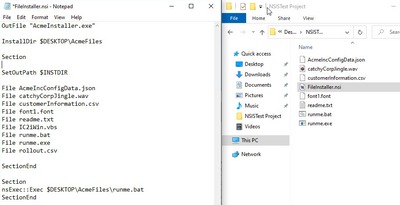 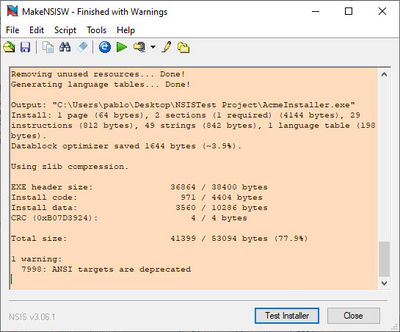 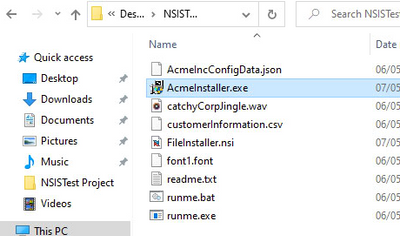 @PaulF : Thanks for the sharing !

This is awesome!!! Thanks.

I've used the 7zip self-extractor before, but this is much more sophisticated.