I realize an MX100 maxes at ~750 Mbps, but we have one on Comcast's new gigabit coax service (along with a 250 Mbps coax circuit, in fail-over) and it just isn't working.  The 250 Mbps works, the gigabit has high (25%-100%) packet loss and high latency, it fails over for one minute several times a day, and occasionally throughput goes to zero without failing over.  Comcast thinks their end is OK (one pingplotter and continuous ping test at modem didn't reveal anything); they do think we're maxing the gig's up speed, 35 Mbps, but the 250's up speed, 25 Mbps, doesn't cause issues).

The only other factors I can think of:

We don't have the skills to properly debug this, so we're going to swap parts, circuits, etc. to isolate the issue.

And configure the WAN uplink shaping to limit the circuit to (say) 500Mb/s.  A number that should be well within reach of your MX100.  If the issue still happens then we know it is not because of the speed.

If adjusting the speed makes no difference, then change it back to how it was.  Then try swapping the two WAN ports over.  Does the issue still stay with the 1Gb/s circuit, or does it stay with the port?  If it does you might have an issue with that port.

Have you tried swapping out the network cable?  I know, pretty unlikely but easy to do.

Over Thanksgiving we will swap all parts (one at a time) and test under load.  If Meraki or Comcast have no more ideas, we're going to cancel Comcast's gigabit coax service.  We're the first to try it in this area; their own tier 2 has no experience with it, so it could be anything - the modem, who knows.

The behavior:  after ~20 minutes we see high packet loss / high latency, the router can go comatose for a few minutes, and even Comcast's modem can spontaneously reset.  A 250 Mbps circuit has no problems.  We disconnected the 250, no change.

We're back to wondering if the router really can handle a gigabit circuit (at its 750 Mbps max).  The 20 minute buildup to problems makes me (newbie) wonder.  On the other hand, it seems someone's suggestion here to throttle the router at 500/25 would have circumvented a router issue.

I'll call tech support again, we may get a replacement modem, we plan to do an iperf test at the modem, and may do a load test with pingplotter running at the modem.

I mentioned this before, but go:

And set the WAN ports to be limited to 750Mb/s - the appliance spec'ed performance. 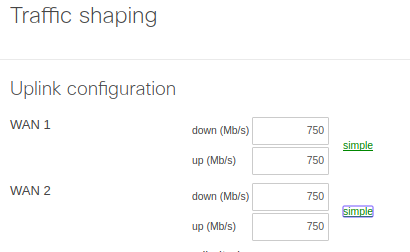 If it works after doing this then you know the appliance can not handle it.  If it doesn't change the problem then it is not the appliance.

Just do as @BetaPhish suggests and limit the bandwith on the WAN connections.

The MX can only handle 750Mbps as you read in the datasheet. If you have advanced security it only does 650Mbps.

We tried most/all of the suggestions here - thanks - and someone's suggestion to reduce MTU size, but nothing had an effect.  In an attempt to generate outgoing traffic, we found a way to easily browse to thousands of webs (Chrome extension + list of top 1M sites); it sort of worked but mostly we just locked up laptops.  Comcast tier 2 tech could have been more helpful.  Anyway, we bailed, cancelling this service; so we'll never know why...