Yes, the picture does not look much like Meraki, correct. The Meraki MR part is just too simple (MR84, MR72, MR33, … you all know them! 🙂). The real challenge is to split the internet-traffic in a redundant way to all those USB-LTE-sticks properly, as there is no other internet connectivity available at the festival location. 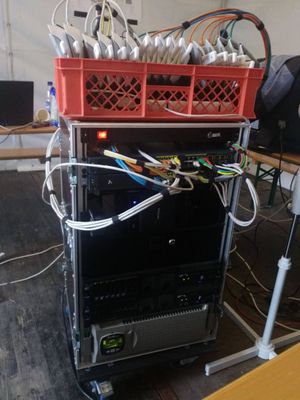 Next time the festival is held (some virus may stop us this year), we may implement some custom client tracking.

well, there is wireless wan (WG) now, but it supports only one single SIM. instead A LOT (the stuff in the red box) is required: during the festival, the LTE performance goes down, as all visitors are registered to the same cell basically. many of those SIMs, properly setup - brings the throughput to a decent level.

also, there are frustrating differences between the handling of WAN1/WAN2 on the MX compared to (integrated) cellular (ie stupid warning in case WAN1/2 are not used/connected). there is countries and situations in which cellular is cheaper, more reliable and/or simply more available then ethernet based internet. and yes, i know that you can now get a WG to "convert" LTE to ethernet by now, but WAN1 with MG, WAN2 with MG, integrated cellular and USB-LTE would not be enough in this rough situation 😉

As you are probably aware, you can not bond 4G/LTE with MLPPP because of many issues but there are a couple of ways you can make it look like you are doing it, with the same results.

Firstly check out SharedBand http://sharedband.com/ I have used this solution a number of times in some tricky and high profile solutions where I have had some, but poor ADSL and used 4G to boost the bandwidth.

Also you can have a look at PepLink, they have a solution called SpeedFusion that also works - this is an expensive way to do it though.

I think you can also use LiveU, even though their solution is designed for the broadcast industry

actually it's my own custom solution: there is just 2 VMs which provide redundant DHCP, DNS, NTP and default gateway (via keepalived) to the meraki gear (and so all Wi-Fi clients) and "on the other end" there is some connection tracking, NAT and other wild stuff like VRF and policy based routing to spread the traffic properly to the LTE routers.

Let me know if the product I make at wifistand.com can ever be of help! Looks awesome!!