MG signals drop out on a periodic basis

MG signals drop out on a periodic basis

Hello. I am looking to see if anyone has experienced this or anything similar. Tech support is a little stuck!

I have a site where there is no hardline so we have two MG21e's connected to an MX67. they are configured as a load-balanced pair.

Signal strength in the area is NOT great hence we have them on an 8m pole, which returns a fairly solid 15Mbps per link; however.. the links keep dropping off. We initially assumed it was the network but now we are not so sure.

One of the connections has recently had 4 dropouts, and there is an unusual similarity between them: 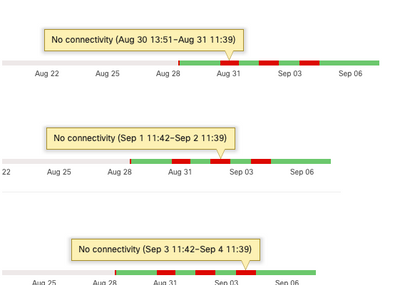 Each one is 3 minutes short of 24 hours and starts and finishes at exactly the same time. The first three are also in a 24 hour pattern - on for 24 hours off for 24 hours; repeated.

The second link seems a bit more stable, but equally when it does drop it has a similar pattern (albeit not exactly the same):

This time a couple of minutes short of 48 hours.

As it's a business we use a third party telecoms company who say they have never seen anything like this so we can only assume it's the Meraki kit not handling something well. but Meraki tech support are stumped! we have gone into Safe Mode so they can access the cells when offline but came up with nothing. they just said the signal strength was too weak which must be the issue. But in both cases he MG21e's are reporting good signal strength; so i am not buying that: 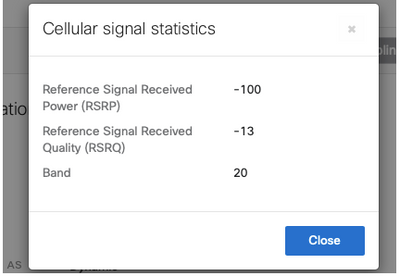 Has anyone seen this behaviour before; and do you know how to resolve it? A reboot does fix it so we wonder if the SIM is attempted to reset the APN details and the MG isn't coping with that well until the next DHCP cycle? Or indeed the operator is changing the IP address by DHCP and causing it to drop.

Any suggestions would be appreciated!

@webleymk3 now I know this isn't a fix, but in the meantime if you get an intelligent PDU, or even a couple of electronic timers, you could program them to power cycle before the issue hits, obviously don't set them to power cycle at the same time!  You could have 1min off once a week (or however frequently it is needed) and if this brings stable connectivity for the rest of the time I'm sure it wouldn't reduce the reliability of the MG21es.

I have the same issue in France.

Is there is any beta firmware for MG that fix this DHCP issue ?

We have the same issue in Serbia and support does not have any solution yet.

Did anybody fix this? Any ideas out there?

After calling support this was the fix:

- The devices are not able to complete the firmware upgrade (from 1.9 to 1.11) due to a corrupted firmware.

- So the MG tries to upgrade and fails. After some minutes they try again.

- In the dashboard we don't see any alerts and the MG is "Up to date" showing 1.11, but support told us that 1.9 is still running
- To resolve this issue, we have put the MG21E in a safe mode, connect them to working internet modem and complete the firmware update before reverting to the operational mode

Maybe you have the same issue and this help.