Possibly the shortest lifetime of a Meraki product or does someone know better... 🤔 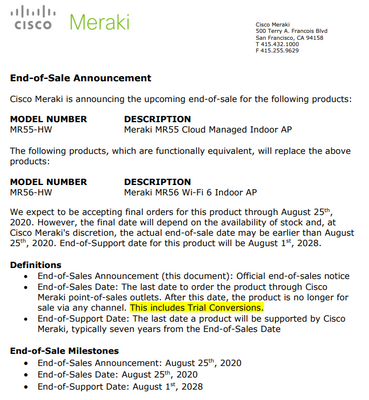 That does seem pretty quick

What about MR45?  I thought I read somewhere MR45 and MR55 both shared a "troubled" chip set or internal firmware of some sort?

@BrandonS MR45 is still happily on sale, perhaps there is a warehouse of stock to shift...

To be fair I have an MR55 and it works fine unless you have Intel WiFi5 chipsets with power saving enabled.

That affects all of the WiFi6 APs that issue.

@PhilipDAth I haven't seen it yet on an MR56 but the laptop that was most affected now has an AX200 card in it so that's fine.  I'll double check with a remaining one to that was quite bad with the MR55.  Perhaps it was the update from 27.4 to 27.5 that helped?

Prestandard did not fly far. Waiting for MR45 to be terminated too.

What about MR45?  I thought I read somewhere MR45 and MR55 both shared a "troubled" chip set or internal firmware of some sort?

I'm going to get the direction wrong, so fact check me, but the MR45/55 were pre standard and didn't support either up- or down-stream MU-MIMO which is a hardware limitation.

With that said, other vendors have struggled with enabling many WiFi 5 features: 160MHz, DL-MU-MIMO, AP to client transmit beamforming (the receive direction works), and more. That leads me to suspect there might be more that is immature or problematic about these chips and it’s not just a matter of only supporting DL-OFDMA.

What chipset does the MR57 use?